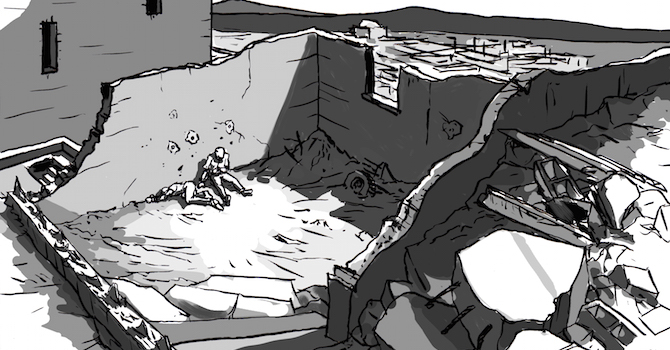 Editor’s Note: This is part of a series on WITNESS’s Ethical Guidelines for Using Eyewitness Videos in Human Rights Documentation and Advocacy. Check back next week for the final post on ethics and eyewitness video, or click here for previous entries.

“How many pictures of dead children do you need to see before you understand that killing children is wrong?”

That was Guardian columnist Suzanne Moore writing in July, 2014, when footage of corpses was commonplace in social media posts about the war in Gaza (even if some of the viral footage was not from Gaza at all, but the nearby conflict in Syria).

A year later, the photograph of two-year-old Alan Kurdi washed ashore on a Turkish beach reignited the debate over what footage is too graphic, intimate, or traumatic to disseminate widely.

Whether the imagery is from conflict zones, refugee crossings, or U.S. cities, where eyewitness videos have police officers violently and even fatally detain African Americans, social media streams and 24-hour news channels make it hard to avoid graphic, often traumatic footage.  When and how to show—or share, or retweet—horrific imagery is not a new conundrum for news outlets and viewers. But the proliferation of camera phones and social media means there is more of it, and it is more intimate and disturbing than ever.

As we wrap up our blog series on the ethics of using eyewitness footage in human rights reporting and advocacy, we focus on the use of graphic imagery.

Responsibility to the Audience

WITNESS’s Ethical Guidelines for Using Eyewitness Footage in Human Rights Reporting and Advocacy is divided by responsibilities to the three stakeholders of the footage: the individuals filmed, the video creators, and the audience. Addressing the traumatic nature of graphic footage is one aspect of considering your responsibility to your audience.

Inherently, many eyewitness videos documenting human rights issues are particularly graphic and disturbing, and can be difficult to watch. To witness the abuse of others can cause horror, fear, sadness, and a sense of hopelessness. Cumulative viewing can contribute to compassion fatigue, and recent studies find that repeated viewing can lead to the mental health impacts of vicarious trauma.

While graphic footage can provide critical evidence about a story or investigation, or be inherent in reporting on a violent issue, it is important to recognize the potential harm that showing it can have on viewers, and consider ways to share the information or contextualize the footage that minimizes harm.

When & How to Curate Graphic Footage

Sensitivities around graphic footage vary across cultures and over time; a viewer is much more likely, for instance, to see graphic footage in Arab news media than on U.S. broadcast news, and thus one could presume the two audiences have different expectations and sensitivities. Take steps to curate eyewitness footage in a way that supports your audience’s capacity to engage with the information it documents. This includes recognizing when it may not be beneficial to share a particular piece of footage.

The way you curate and contextualize a graphic video can make the difference between viewers seeing it as gratuitous violence or informative documentation. Do not curate videos to shock, but rather to inform your audience. Providing context about why the video(s) is important and potential ways viewers can respond helps ensure that the video contributes to a more informed and engaged audience, rather than leaving viewers emotionally exhausted.

In an analysis of the New York Times’ decision to post the cellphone video of the fatal shooting of Walter Scott on its homepage, Poynter’s Al Tompkins runs through a checklist to determine if that was justified, or gratuitous. He posed a series of questions before determining that the New York Times was justified in its decision, including:

A survey by the Eyewitness Media Hub of reporters and human rights professionals who regularly view eyewitness footage found that viewing distressing footage had a much more traumatic impact when the content came as a surprise. If a video shows graphic images such as a killing, corpses, or severely injured people, take steps to warn viewers of the graphic content they are about to see, and give them the option to learn about the abuse without being exposed to such images.

Think through the ways viewers will engage with the footage depending on the audience, the platform, and the technology to ensure that they receive that warning. For instance, if they are watching closed caption news, or scrolling through Facebook, they may not hear the audio. If the video is included in an online article or blog, consider adding a hyperlink to the video and warning readers that the video is graphic, rather than embedding the video within the post. Sometimes a “play” button tempting enough that viewers may click on it without having noticed the warning.

As more research is done on the impact of eyewitness footage on viewers, those of us who use it in our work will continue to develop best practices to ensure that by exposing abuse we are not contributing to further harm.

For more guidance, see WITNESS’s Ethical Guidelines for Using Eyewitness Videos in Human Rights Reporting and Advocacy. Next week we’ll wrap up our blog series with a compilation of resources we used in developing our guidelines. Share your own methods and challenges in using eyewitness video, and what resources you use to make those decisions by reaching out on Twitter or sending an email to feedback [at] witness [dot] org.