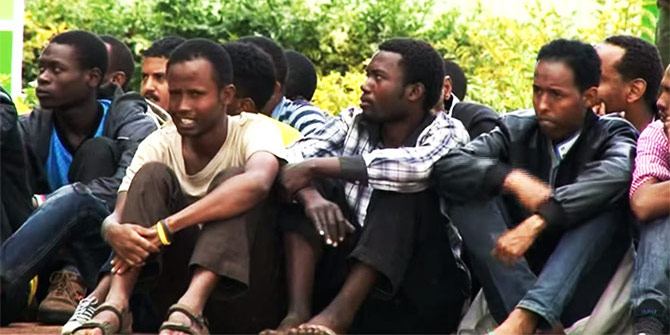 By Vienna Maglio and Madeleine Bair

Following recent terrorist attacks, including three deadly bomb blasts in Nairobi last month, Kenyan police have rounded up thousands of foreigners, many of them refugees from Somalia and other neighboring war-town countries, in a nationwide crackdown on terrorism. In Nairobi, where many Somali refugees have settled in the neighborhood of Eastleigh, several thousand people, including women and children, were taken from their homes to the Kasarani sports stadium for processing, as seen in the video above.

On Twitter, activists are equating the detentions to a “concentration camp,” and have taken to Twitter with the #KasaraniConcentrationCamp and #JusticeForEastleigh hashtags. Authorities are holding detainees in substandard conditions, denying them access to proper medical care and supplies and barring relatives, humanitarian workers, and lawyers from entry.

Throughout the operation, called Rudisha Usalama Kenyan police have arbitrarily discriminated against Somali immigrants by stopping them in the streets, raiding their homes in the middle of the night, and demanding bribes to avoid detention. The video below shows police rounding up women and children in Eastleigh, and features testimony from Somali refugees describing the harassment and pat-downs they have experienced since the operation began.

Kenya has largely halted the registration of refugees in the last few years, preventing them from obtaining legal documents. This puts thousands of war refugees in what Amnesty International described as a catch-22: unable to achieve legal status, and vulnerable to detention and deportation. Authorities have slated hundreds of the detained immigrants for deportation to their home countries, and others for a return to refugee camps. Many human rights groups have pointed out that these actions violate Kenyan laws and the UNHCR’s guidelines for treating Somali refugees.

The massive roundup has put many immigrants in danger. A Human Rights Watch report documented overcrowding and police beatings in an Eastleigh police station. A Somali radio station reported a woman in Kasarani losing consciousness after her ninth day in the stadium. According to another report, a baby was found starved to death in an Eastleigh home after its mother was detained for several days.

Photo: Video still from Detention at Kasarani, by InformactionTV.