Published October, 2018 by WITNESS in Bangladesh

In early August 2018, a wave of mass protests seized the city of Dhaka, the capital of Bangladesh. Sparked by the deaths of two young school children by a speeding bus, students, mostly attending high school or university, thronged the streets demanding that their government improve road safety. For about a week, Dhaka, home to over 18 million people, was in gridlock. Largely steering nonviolent assemblies, youth were seen sloganeering, creating human chain links, addressing student unions at university premises, or stopping buses, trucks and other vehicles to check whether they were in roadworthy conditions, as in this video (in Bangla) filmed by the Daily Star:

Inspiring widespread anger on social media, a nationwide youth-led movement for road safety began to emerge. A few days into the capital’s standstill, the world witnessed the transformation of peaceful demonstrations turn into bloody violence. The reported brutality meted out by state-sponsored groups, such as the Chhatra League which is linked to the ruling Awami League Party, and the police in the form of tear gas, rubber bullets, violent beatings, mutilations, rape, and murder were not just against students, but also journalists. According to media updates, including international news reports, journalists had been beaten for covering the protests, their phones and cameras destroyed, and their lives threatened if they did not delete recorded footage.

Veteran photojournalist, writer, activist, and human rights defender, Shahidul Alam, spoke out against the government clamp down with Al-Jazeera during the week of protests. Inspired by the youth of his country, Alam took to the streets to document students and be a witness. He has since been arrested, interrogated and jailed for being outspoken, under Section 57 of Bangladesh’s infamous Information and Communication Technology Act, which could see him in jail for up to 14 years. The government has accused him of “spreading propaganda”, but Amnesty International has declared Alam “a prisoner of conscience”. 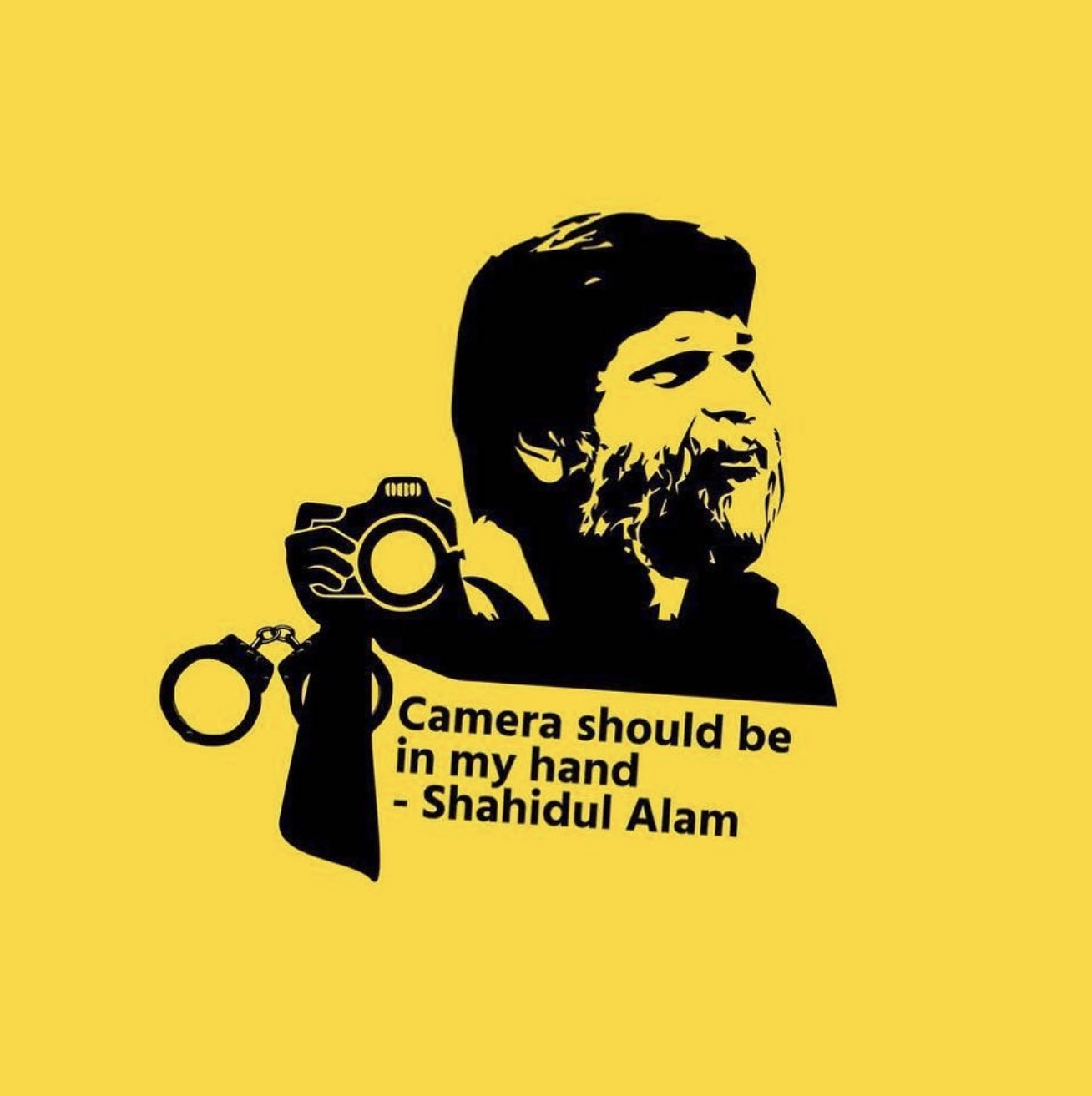 The Right to Record

Alam has been witness to many pivotal moments in Bangladesh’s history, starting with 1984’s people’s resistance against the then President Ershad’s military junta, and in 1990 when people power forced their president to step down from his protracted seat. In 1991, the country saw its first free elections and Alam’s photography stands as important records of Bangladesh’s democratic history. Bangladesh’s Prime Minister Sheikh Hasina Wajed, who has ruled the country since 2009, has repeatedly favored the curbing of dissenting voices.

Telecommunications network shutdowns to silence any voices against the State is becoming all too common in the South Asian region, not just in Bangladesh. WITNESS has previously advocated against shutting down the Internet with the intention of control, viewed as a stifling of the freedom of expression. WITNESS has also emphasized the importance of demanding tech companies to be more transparent in how they make their decisions, in light of Facebook’s complicity in Myanmar, Sri Lanka, India, etc.

The ‘Right to Record’, which we view as the “right to take out a camera or cell phone and film the military and law enforcement without fear of arrest, violence, or other retaliation” has been approved by the United Nations Human Rights Council, an inter-governmental body Bangladesh has recently joined in October 2018.

With the help of cyber activists in Bangladesh and abroad, students were able to mobilize on the Internet in order to get their messages across through multiple streams. As news of the protests broke into international terrain, Prime Minister Hasina’s government sped up the approval of a draft Road Transport Act. The Dhaka Tribune reported that the expediting of the Act, which also outlines death penalty for wilfully fatal road accidents, was due to students’ protests.

In its trainings across the Asia Pacific region, and worldwide, WITNESS has and continues to advocate for the use of encrypted, low bandwidth, secure messaging apps during crisis situations. As mobile networks began to slow down and were eventually halted, calls for the use of secure messaging apps like Signal and FireChat were not uncommon. Trending hashtags #RoadSafetyBD and #WeWantJustice further helped amplify student voices, as their movement gathered momentum on the Twittersphere, Instagram and beyond.

In surge situations such as this where disinformation is abound, it can be a difficult task to filter digital evidence that is authentic, and without endangering individuals’ lives. Over the years, WITNESS has shared many resources, guidelines, and tools for those curating online videos. Among these, a brief 4-step guide on How to Verify Footage of Human Rights Abuse outlines some important techniques to determine, to the highest degree possible, that what a video documents is true and can be trusted.

In this manner, WITNESS’ Asia-Pacific team was able to collaborate with a group of students in Dhaka to publish their verified video, in an instance where the students were able to corroborate accurate metadata, ensuring valuable security information was protected, and crucial information was succinctly disseminated:

Videos that are authenticated and are kept intact through an organized archiving effort, thus tend to be more trustworthy and prove useful in a lengthier advocacy campaign or, in a courtroom. Such efforts by cyber activists operating on Reddit, a popular social news aggregation and discussion site, should be applauded. Reddit contributors continued to upload evidence on GoogleDrive, including video evidence, sidestepping the media censorship enforced by the Bangladeshi government. Live updates of the protests and the arrest of Shahidul Alam was made available on the site as well as a valuable archive of digital video evidence containing testimonies.

The curation and collation of all information pertaining to the situation in Dhaka in a single, secure, recorded space safeguards valuable evidence that may come to greater use, especially since after the lifting of telecommunications disruptions where videos uploaded have, mysteriously, disappeared. Not only that, digital archiving serves to preserve a capsule of the moment, recorded for posterity.

Bangladesh has recently been applauded for its role in assisting Rohingya refugees to ensure safe passage from Rakhine, Myanmar to camps on Bangladeshi soil, that aided and sheltered over 600,000 refugees, but it is clear that its treatment of truth-tellers has been appalling. The Bangladeshi government has been looking into further controlling social media by installing a body to monitor cyber threats. It has recently deployed security agencies to assist in this crackdown against dissent, already arresting individuals for posting anti-state propaganda videos. It has also looked to Facebook for cooperation in this endeavor.

The new Digital Security Act, the draft of which has been rejected by the country’s journalists, is set to further stifle freedom of opinion and will see Bangladesh violate its obligations to several international covenants. The government has also recently endorsed a Broadcasting Bill with restrictive provisions and approved a Mass Media Employees Bill governing working hours and days off.

International human rights organizations and media institutions such as Amnesty International, Reporters without Borders, World Press Photo, the Pulitzer Center, the International Federation of Journalists, amongst others, continue to highlight Shahidul Alam’s unjust imprisonment. Worldwide condemnation has been growing, including a joint statement from public intellectuals Arundhati Roy, Vijay Prasad, Eve Ensler, Naomi Klein, and Noam Chomsky. In Nepal, India, Sri Lanka and elsewhere in South Asia, journalists, artists, and activists have been vocal in their demands for the release of Alam and are not showing any signs of backing down.

A movement that started with calls for road safety has, indeed, shown the world that there is a lot more at stake here for the future of a nation, and certainly, in upholding its youths’ fundamental freedoms. Will it charter a course towards meaningful change, away from a long history of subduing student-led dissent? All eyes are now on Bangladesh. 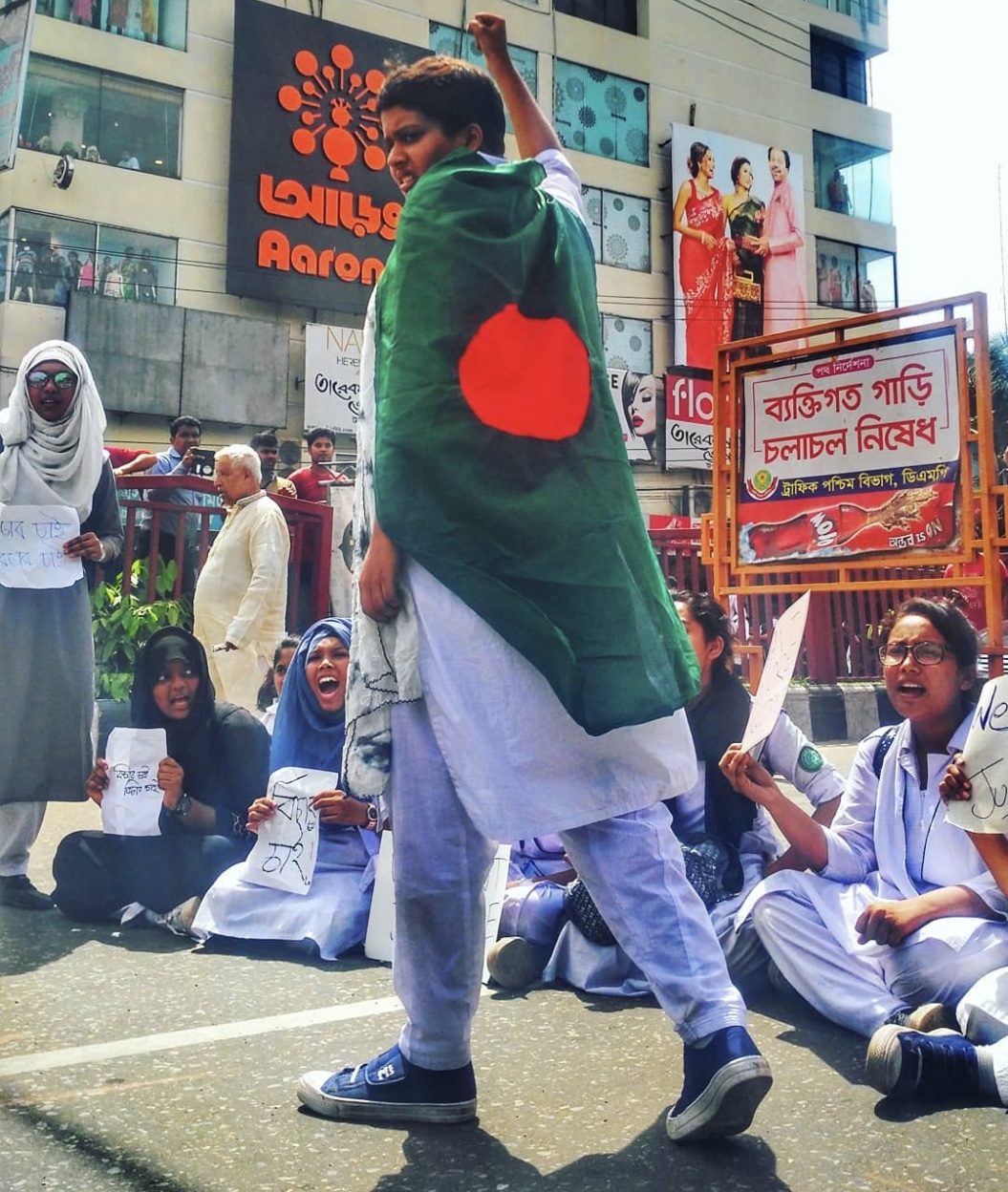 Meghana Bahar is WITNESS’ Social Media and Communications Consultant for the Asia-Pacific region. She is a gender and media specialist, with 19 years of experience in transnational women’s and human rights movements.