From Venezuelan protests to police abuse in the U.S., many of this year’s biggest human rights stories have been documented and fueled by videos. Amateur and often graphic footage galvanized international attention to the killing of black men by police officers in the U.S. It exposed the brutality of Islamic State and Boko Haram. It laid bare the reality of sexual assault in Egypt and domestic abuse in the NFL. None of these abuses were unknown or unheard of, but their exposure to mass audiences through video demanded action.

At the end of each year we reflect on the twelve months of citizen video we curated on the Human Rights Channel—what images stuck with us, what stories entered our consciousness, and what impact those videos made on the issues they documented.

What stands out this year is not only the sheer volume of citizen footage, but the  growing audience for it. More investigators, researchers, journalists, and activists are getting their information from video recorded by average people documenting their own communities. More citizens are engaged with human rights issues because footage fills their Facebook pages and Twitter feeds. Of course, not all human rights issues are captured on video, and not all online videos of human rights capture mass attention. But today, all of us come face to face with human rights abuse on our screens, and must confront what it exposes, what it means, and what we can do about it.

How Graphic is Too Graphic?

Video still from the HRC 2014 Year in Review.

While the graphic nature of videos documenting human rights abuse has always been a challenge for investigators, reporters, and human rights advocates, this year such footage made its way to the general public. The execution of James Foley, broadcast by a YouTube channel of the Islamic State (IS), launched not only a political focus on combatting IS, but a debate over what footage is appropriate to share online, and who should be in control of those decisions.

In June, another shocking video sparked a response from Egyptian leaders as well as a nationwide dispute regarding its distribution. Uploaded the day of Egyptian President Sisi’s inauguration, a video described as showing a sexual assault in Tahrir Square turned Sisi’s attention to the pandemic of sexual violence in Egypt. While authorities immediately arrested and tried several suspects involved in the assault, they also investigated the filmer, describing the video as a “violation of public decency” and calling upon YouTube to delete it. (YouTube only deleted versions in which the victim was identifiable.)

Cameras everywhere have presented us with footage of everything. As we find horrific images only a click away, each of us individually, as well as technology companies, newsrooms, and society as a whole are grappling with what images we should see, and if there are ones to which we should not bear witness.

What information is sufficient to be an informed citizen? What effect are images of abuse having on our psyche, our ability to keep watching, and our willingness to act on what we see? Or as Guardian columnist Suzanne Moore wrote during the war on Gaza, “How many pictures of dead children do you need to see before you understand that killing children is wrong?”

Year of the Manipulated Video

If 2014 was the year of graphic imagery, it was also the year of manipulated footage. Distributed with inaccurate descriptions, edited with graphic effects, or filmed with actors.

If 2014 was the year of graphic imagery, it was also the year of manipulated footage. Distributed with inaccurate descriptions, edited with graphic effects, or filmed with actors, manipulated videos showed up often enough to make a savvy viewer question everything she sees online. The abundance of false footage means that video can confuse rather than elucidate the incident it purports to document. It certainly made our work curating videos from Venezuela, Gaza, Ukraine, and elsewhere more laborious.

Fortunately, activists and journalists have responded with a number of new tools and resources to help viewers verify that what we’re watching is what we think it is. Still, 24-hour news channels and the average viewer are unlikely to take the time to verify online footage before sharing, and continue to unintentionally spread false visual information.

Authentic Videos Made an Impact

Despite the challenge of verifying online video, and the overwhelming abundance of it, audiences have not lost their capacity to be moved by videos of abuse. Plenty of videos featured on the Human Rights Channel this year sparked debate, outrage, or investigations.

Footage of Spanish guards striking African migrants climbing the border and escorting them back to the Moroccan side drew condemnation from Spanish politicians on up to the European Commission and the UNHCR. Cell phone video captured Papua New Guinea police as they set dogs upon an unarmed civilian, sparking an investigation into the incident. In Vietnam, labor unrest at the construction site of a Samsung factory was reported in global business news thanks to footage from the scene. Residents of Ferguson, Missouri, drew the world’s attention to not only the killing of an unarmed black teenager by the police, but to the excessive police response to the protests that followed. 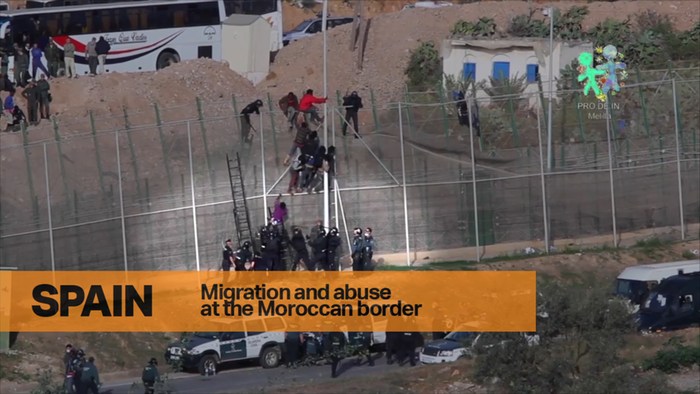 Video still from the HRC 2014 Year in Review.

But many of us would like to see videos do more than expose and outrage. From Syria to Staten Island, citizens filming abuse in their communities want to see their footage used as evidence to bring about justice. Here in the U.S., a grand jury’s decision not to indict a New York City police officer in the death of Eric Garner has been met with such anger because the fatal confrontation between Garner and police was caught on camera. What good is eyewitness footage, we must ask, if it fails to hold perpetrators to account?

While Garner’s death remains under federal investigation, it is a sobering reminder that video is only one tool in the struggle for justice. How many of the investigations and reports that have resulted from this year’s citizen videos of abuse will result in significant change? That depends on much more than quality of the videos and the number of views they receive. It depends on society’s willingness and capacity to respond.

One YouTube channel whose videos of a Syrian town under siege have been featured on international news outlets went dormant for several weeks this year. The activist behind the videos, Raed Fares, explained to Syria Deeply that his community of Kafranbel grew tired of sending messages to the world. “People would watch them, but everything ends there.”

In 2015 there will inevitably be more access to cameras and the internet, more citizen videos, and more manipulated footage to sift through. Fares’ quote presents a challenge to all of us creating, curating, and watching human rights video: How can we ensure that such footage is not only watched, verified, and shared, but also ensure that it serves a greater purpose?

We must remember that it can take months or years to effect change. While the video of Eric Garner’s death did not lead to the indictment of an officer, it may still be used in the Justice Department’s investigation.

With that in mind, we must remember that it can take months or years to effect change. While the video of Eric Garner’s death did not lead to the indictment of an officer, it may still be used in the Justice Department’s investigation, and has resulted in proposals by President Obama and New York City’s mayor Bill de Blasio to reform police training and protocol.

International justice watchers can find inspiration in the recent confirmation of charges by the ICC against Congolese warlord Thomas Lubanga, found guilty for recruiting and conscripting child soldiers more than a decade ago. The case, in which video footage was used to prove the young age of the soldiers, gives us hope that justice can prevail, and that video can play a critical role.

And while the residents of Kafranbel, Syria may wonder what long-term impact their protest videos make, we ended the year learning that they have found a reason to film them once again.

The Human Rights Channel’s Year in Review montage consists of human rights footage from eyewitnesses and activists around the world that caught our attention in 2014.

However, it is by no means a comprehensive review of ALL important human rights issues captured on video in the past 12 months.

Below are the original videos featured in the 2014 Year in Review, along with links to related videos and information.

Confrontation between Military Police & residents of the Pavão Community after DG's funeral - April 24, 2014

For more videos and information on police in favela communities, see this blog post and video playlist.

See here for more context behind these videos.

See here for more information on the forced eviction filmed in this video.

For more videos from across Venezuela of protests against President Nicolas Maduro in early 2014, see this YouTube playlist. Read here about the challenge of verifying videos of this story, due to the distribution of false footage circulated to undermine citizen reporters.

A little girl pulled alive from under the rubble in Maasranieh - January 22, 2014

Click here for more context on this video by a UN Special Representative to South Sudan.

See this Human Rights Channel blog on the targeting of journalists and filmers by Ferguson police during protests in response to the shooting of Michael Brown, and this playlist for related citizen videos.

SPAIN: Migration and abuse at the Moroccan border

Immigrants enter Melilla, Spain on the morning of February 28, 2014

This is how the Ministry of Interior defends "SPAIN"

See here for more information about the video above, which spurred responses from the UN and European politicians regarding the treatment of migrants by Spain’s border guards.

WESTERN SAHARA: Opposition to oil drilling in an occupied territory

See here for background on opposition to plans by a U.S. company to drill for oil off the coast of Western Sahara.

This blog post details state violence and allegations of other abuses during a series of forced evictions in the Cape Town area.

GAZA: Thousands of civilians killed in 50 days of airstrikes

See this YouTube playlist for more verified videos from residents and activists of Gaza and Israel during the conflict.

See the bottom of this blog post for more context on the forced eviction documented above.

For more videos from Burkina Faso before and after the president was forced to resign, see this playlist.

17/10/14 Occupy Central: Police use batons to beat protestors with umbrellas

Testimony from "normalista" students of Guerrero

Click here for more videos of protests and interviews in Mexico reacting to the disappearance of 43 college students from Ayotzinapa, and here for background on the first video above.

WITNESS’ Human Rights Channel identified and verified over 800 citizen video reports of human rights abuse in 2014. Here’s some of what we found. (Click and drag to move about the map.)

Visit the Human Rights Channel on YouTube to see more than 800 videos curated in 2014, and read our blog posts on the issues we followed this year. You can find us @ythumanrights on Twitter.