When WITNESS was founded in the early 1990s, we distributed cameras to activists around the world so they could direct their lenses–and international attention–on injustice in their communities. Our objective, like that of many human rights activists and organizations worldwide, was–and still is–to make an “invisible” problem visible, and to turn that visibility into action.

Today, thanks to camera phones, internet access, and video sharing platforms like YouTube, human rights violations that were once hidden from view or easy to ignore can be on your screen in just a few clicks, from girl hostages of Boko Haram in rural Nigeria and chemical weapons attacks in Syria to police killings on U.S. streets.

For those issues and a growing number of others, eyewitness video has played a critical role in building awareness, fueling social movements, and informing policy and action. But for every eyewitness video broadcast on cable news, there are thousands of videos documenting injustice that don’t receive the same attention–that never rack up views beyond the double digits, or make a footnote in a human rights report.

Eyewitness footage alone does not lead to visibility and justice. First, it must be found, verified, understood within the context of a larger story, and shared with those who have the power to take action.

The WITNESS Media Lab is dedicated to bridging this gap so that videos by citizens and activists from around the world result in greater awareness and action for human rights. To begin, we have identified five key challenges our work will address.

When thousands of migrant laborers were deported from Saudi Arabia in 2013, cellphone footage surfaced that documented the corporal punishment they had endured. How could we have discovered this footage while the migrants were still trapped in dire working conditions? When investigators cannot document abuse that takes place behind closed doors or in repressive societies, how can we collaborate with those impacted to bring their stories to light? How can we discover documentation of abuse among the half million hours of video uploaded to YouTube every day, and among the growing number of online video sharing platforms?

When we received footage purporting to document torture in a Venezuelan prison, there was little information to corroborate where and when it took place. How can we corroborate the authenticity of videos from places that are difficult to identify–such as detention centers, open fields, and job sites–so they can be used for justice and accountability?

Videos that show abuse clearly and dramatically are apt to attract media attention. But injustice isn’t always telegenic, and citizen journalists face many limitations in filming clear and compelling footage. 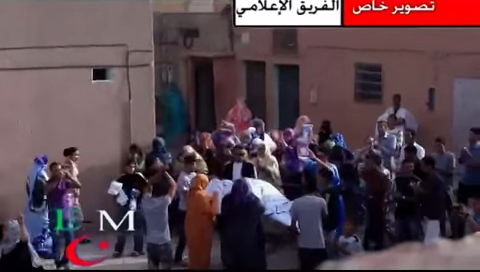 When the UN mission in Western Sahara was up for a vote by the Security Council in April, local activists wanted to raise awareness of the abuses they are subjected to under Moroccan occupation.

Yet, precisely because of the repression they face, activists must film protests and police violence surreptitiously and from a distance. How can we attract attention to footage that is shaky, unclear, or filmed covertly by at-risk activists?

Rarely does one eyewitness video alone tell a story of abuse. More often, context is needed to understand what happened, as well as when, where, and how. 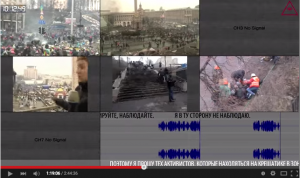 Videos from Euromaidan are synchronized to show numerous perspectives of an event.

When dozens of Euromaidan protesters were killed in February of 2014, hundreds of videos documented the fatal clashes with police, but no single one of them could answer the question of whether the killings were a coordinated effort. How can we effectively organize and present a large volume of videos to monitor and document abuse? How can we connect the dots between a collection of videos and other information to investigate and document a complex issue?

When a sexual assault was caught on video and shared online in Egypt, it spurred President Sisi to speak out about gender-based violence, and to call on YouTube to remove the video for the sake of the assaulted woman. The desire to protect vulnerable individuals often clashes with the desire to expose injustice. How can we use eyewitness videos to raise awareness and spark action while respecting the safety, dignity, and privacy of those in the videos?

The challenges are immense, but innovation in the fields of advocacy, journalism, and technology offers great potential. The goal of the WITNESS Media Lab is to support that progress. Next week we’ll share some of the models, tools, and solutions that address these challenges.

For those who have followed WITNESS’ work curating eyewitness videos since we launched the Human Rights Channel in 2012, we appreciate your support and want to explain how the WITNESS Media Lab will build upon that initiative.

As our name suggests, the Media Lab will experiment with new tools and strategies, and share challenges, tips, and resources along the way (starting with what we learned curating videos on the Human Rights Channel). We will collaborate with partners from around the world and a host of fields—from journalism and activism to design and technology—to find, verify, contextualize, and amplify videos of abuse. We will focus on a series of projects spotlighting specific human rights issues documented by eyewitness videos. Those projects will span the globe and range from monitoring emerging crises and investigating hidden abuse, to amplifying an under-reported story to an audience that can take action.

We will begin by focusing on an issue close to home: police abuse in the United States. For decades, bystander video has played a key role in bringing police misconduct to national attention. By analyzing cases of police violence, tracing the trajectory of a video’s impact, and bringing together individuals who have filmed abuse and those who have used bystander footage for advocacy, we will explore the role, challenges, and potential of video in bringing about visibility, accountability, and justice.

Bookmark lab.witness.org where we will share those projects along with resources on innovative ways to source, verify, and contextualize eyewitness footage for human rights. And reach us on @WITNESS_Lab with your own ideas, resources, and feedback.