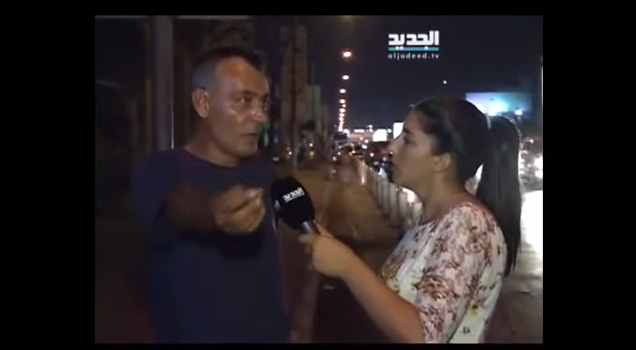 Abuse of Syrian Child on Video Sparks Outcry and Arrests

By Charlotte Gilliland and Madeleine Bair

“Lift up the stick and beat his face and head,” says a voice off camera. “No,” pleads the defenseless boy, later identified as a nine-year-old Syrian refugee. ”Don’t beat me.” At 1:46, just before the footage is cut-off, older voices off camera begin to laugh.

Over the course of one weekend in July, this clip received a firestorm of media coverage in Lebanon, motivated an online campaign, and resulted in arrests and a heated discussion about discrimination against Syrian refugees and the treatment of the children depicted in the video.

According to an article about the video in the Lebanese newspaper, The Daily Star, the clip was originally shared on the Yasour news website, which received it through the mobile messaging platform, WhatsApp. “The person who sent us the video has nothing to do with it, and he has asked that we keep his identity private,” the owner of Yasour.org reportedly told the Daily Star. “We don’t have much information on who the perpetrators are.”

The video uploaded by Yasour has since been removed for violating YouTube’s terms of service, but ANA, a media organization focusing on Syrian citizen journalism, uploaded a subtitled version to its YouTube channel which quickly received thousands of views.Note: Out of concern for the safety of the children in the video, The Human Rights Channel uploaded the same video and subtitles, using a blurring tool keep their identities anonymous. That video is embedded above.

What sparked outrage about the video was not only that it appears to show adults encouraging young children to engage in violence, but that the accents indicate that the off-camera voices and the child aggressor are Lebanese, while the child receiving the beating is Syrian. (Reports later verified their nationalities.)

As the video made the rounds in Lebanese news and on social media on Saturday, July 19, an online petition was created on Avaaz, the online campaign platform, demanding that Lebanese authorities “find the father of Abbas and take appropriate legal action.” The campaign was created by Yazan Atassi, a Syrian living in Dubai, who felt compelled to not only call for government action, but also to raise awareness of this shocking example of child abuse. Atassi reported to the Human Rights Channel in an email correspondence feeling extremely sympathetic towards the young Lebanese boy, who was seemingly manipulated by those around him. Atassi wrote that this video was about more than a sectarian issue—it was about a children’s rights issue as well.

As Atassi had hoped, Lebanese authorities were indeed paying attention. On the official Twitter account of the Internal Security Forces, the agency stated that it was beginning investigations on the matter. Here is the original tweet in Arabic:

By Saturday night, a television crew tracked down the parents of the two boys. They denied being present during the incident, and explaining that it was a group of teenagers who egged the boys on and filmed the abuse. In an interview, the father of Abbas, the Lebanese boy, tells the reporter that his son is two, and that the other child is a 9-year-old Syrian refugee, Khaled, who spends a lot of time with his family. The dispute, he argues, has to do more with juvenile misbehavior than with xenophobia. “We should not escalate this issue; it was just two kids playing together. There is no sectarian conflict going on.”

Khaled’s mother told the TV crew that her son stopped going to school because he was harassed and threatened for being Syrian. She learned about the incident caught on video when her neighbor told her that her son was on TV. But, she said, she doesn’t hold a grudge against Abbas’ family for what happened.

Despite the parents’ explanations, the next day Lebanese authorities announced the arrest of Abbas’s father and a teenage cousin identified as the filmer.

While the online campaign received over 2,000 signatures the day that it was launched, both Atassi and Avaaz reported that they could not say for sure what effect the campaign had in prompting such quick legal action. The online campaign acted, at the very least, as a platform for outraged citizens to share their sentiments, which quickly branched out to a Facebook page that gained over 1,000 followers on the day of its creation.

Many activists see a victory in the prompt response by law enforcement to what appears to be violence targeted at a Syrian refugee child, but one month later, questions remain about the incident caught on video, the authorities’ digital investigation, and the impact the video’s exposure has made.

To begin with, there is the story behind the video itself. ANA has uploaded two clips that add up to less than 3 minutes of footage, which are alarming but are not enough to draw conclusions about what is taking place and who is responsible for the child encouraged to beat the other. We have seen many cases of videos that, without proper context, can lead viewers to an incomplete or incorrect interpretation of what they are watching. Does any other footage exist, and would it provide a more complete understanding of the incident? Would more footage help clarify whether the case is one of juvenile misbehavior or of xenophobic abuse? (Following the arrests, local residents mused that the incident was misunderstood and blown out of proportion. One man said that Khaled was actually the step-brother of Abbas, while another resident reported that the video was filmed as a “joke.”)

Secondly, what is the mandate of Lebanon’s Cyber Crime unit that made the arrests, and how does it monitor crimes caught on video? The agency’s director told news media that metadata helped investigators trace the video uploaded on Yasour.org to the family’s whereabouts in the southern suburbs of Beirut. But what metadata led investigators there, and how did the Cyber Crime unit—known for monitoring online communication of Lebanese reporters and citizens, in violation of Lebanon’s own laws—acquire it? (While WhatsApp has taken hold in newsrooms around the globe, the platform’s security flaws have come under scrutiny for putting user data, including location, at risk.), Is the ease and willingness of Lebanese authorities to track down individuals behind online videos a cause of concern for potential whistleblowers, citizen journalists, and online activists?

Finally, are the children in question any safer thanks to this video’s exposure? The whereabouts of the attacked boy and his family are unclear. One official said they were referred to the UNHCR, while another reported they were relocated to a “safe place” thanks to a generous donor. Attendees at a press conference on July 23 told the Daily Star that the family was still in the neighborhood, and the target of threats by the other boy’s family and the neighborhood at large. Atassi, the Avaaz campaigner who is following the case, also said the families remain in the same neighborhood. Speaking at the same press conference, Social Affairs Minister, Rashid Derbas, said that both boys have received attention from social service specialists, and proceeded to condemned the media for revealing their faces and names in news reports.

Whether the government’s prompt response to this video demonstrates a sincere concern by the current administration about violence against Syrian refugees in Lebanon will take longer to assess. More than one million Syrian refugees have relocated to the country, giving Lebanon the highest per-capita concentration of refugees in the world. While struggling for basic necessities like employment, housing, and education, refugees have faced resentment from Lebanese who blame them for rising prices, declining wages, and overcrowded classrooms. Several social media campaigns have been launched to fight racism in the country in the past year, including this video featuring activists speaking out against racist discourse.

Charlotte Gilliland is a student at Tufts University and is interning with the Human Rights Channel at WITNESS. Follow her @cgilliland07.