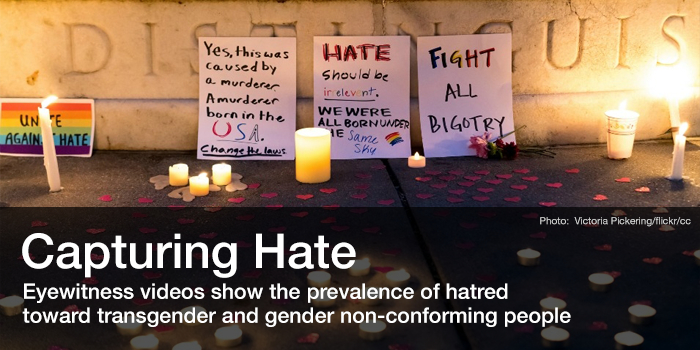 Published June, 2016 by WITNESS in Update

When a lone gunman walked into a nightclub in Orlando on June 12, he did so with one intention: slaughtering its patrons. He did not choose a straight bar. A college campus. Or a fast food restaurant. He went to Pulse Night Club to carry out what would be the deadliest mass shooting by a single gunman in U.S. history because it was a gay club.

Whether or not he intentionally attacked the club on its Latin night remains unclear, but the composition of the victims and survivors of the Pulse attack sadly reflects violence against the LGBTQ community more broadly. As the recently released annual report from The National Coalition of Anti-Violence Programs (NCAVP) shows, hate violence disproportionately impacts LGBTQ people of color.

While the Orlando shooting has drawn attention to homophobic violence, it has also given more urgency to the need for better data on this issue. Better information, in fact, is one of the key recommendations in the NCAVP report. To that end, the WITNESS Media Lab has been curating and analyzing data from videos of violent acts against transgender and gender nonconforming people that have been captured and shared for entertainment, as another way to tell a story around the prevalence and climate of violence against trans people. While still weeks away from releasing our full report, initial findings paint a picture of accepted and encouraged violence against trans and gender nonconforming people in which Black and Latinx communities are most affected.

Initial online research resulted in so many types of videos that mock, disparage, fetishize, and threaten queer, transgender, and gender nonconforming people, that we’ve narrowed the search criteria to a single phrase and limited the number of sites we analyze to effectively scope this 15-week project.

Using the search phrase, “tranny fight,” we’ve harvested thousands of URLs and scraped data from hundreds of web pages that host videos. After cleaning the results to only include eyewitness footage—that is, videos taken by bystanders witnessing violence against trans or gender nonconforming people—we collected data that shows viewer engagement as well as the comments reflecting opinions and attitudes toward people perceived as LGBTQ.

Here is a sample of what we found on just one platform (YouTube):

As we complete data collection, we’ll be meeting with our growing list of partners and advisors—including The Trans People of Color Coalition (TPOCC), The National LGBTQ Task Force, Lambda Legal, Center for LGBTQ Studies (CLAGS), Metropolitan Interactive, and Immigration Equality—to analyze and contextualize our findings. We are also creating resources, guidelines, and recommendations for advocates, journalists, law enforcement, and technologists on how they might effectively and ethically use these eyewitness videos for data collection, crisis response, and legal advocacy.

Our forthcoming full report will include visualizations of the data, a video, and an online platform for sharing our tools and methodology.

For a 1-Sheet Summary of Data Sample, see below. 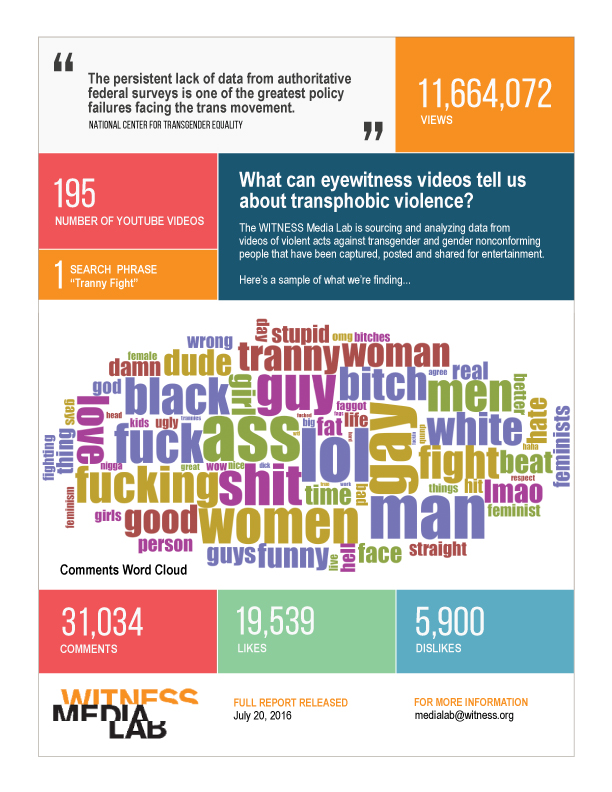