Published April, 2020 by corinfaife in Uncategorized

Last updated March 1, 2021. This backgrounder is also available as a pdf download.

WITNESS helps people use video and technology to protect and defend human rights – witness.org. For more on our work on deepfakes and preparing better: wit.to/Synthetic-Media-Deepfakes

Deepfakes make it easier to manipulate or fake real peoples’ voices, faces and actions as well as the ability to claim any video or audio is fake. They have become a critical concern for celebrities and politicians, and for many ordinary women worldwide. As they become easier to make, WITNESS advocates for responses to harms now and preparation for future threats that center vulnerable populations globally. In this backgrounder we explore:

What are deepfakes and synthetic media?

Deepfakes are new forms of audiovisual manipulation that allow people to create realistic simulations of someone’s face, voice or actions. They enable people to make it seem like someone said or did something they didn’t or an event happened that never occurred. They are getting easier to make, requiring fewer source images to build them, and they are increasingly being commercialized. Currently, deepfakes overwhelmingly impact women because they’re used to create non-consensual sexual images and videos with a specific person’s face. But there are fears deepfakes will have a broader impact across society, business and politics as well as in human rights investigations, newsgathering and verification processes.

Deepfakes are just one development within a family of artificial intelligence (AI)-enabled techniques for synthetic media generation. This set of tools and techniques enable the creation of realistic representations of people doing or saying things they never did, realistic creation of people/objects that never existed, or of events that never happened.

[See examples of all these here]

These techniques primarily but not exclusively rely on a form of artificial intelligence known as deep learning and what are called Generative Adversarial Networks, or GANs.

To generate an item of synthetic media content, you begin by collecting images or source video of the person or item you want to fake. A GAN develops the fake — be it video simulations of a real person or face-swaps — by using two networks. One network generates plausible re-creations of the source imagery, while the second network works to detect these forgeries. This detection data is fed back to the network engaged in the creation of forgeries, enabling it to improve.

As of early 2021, many of these techniques — particularly the creation of realistic face-swap deepfakes — continue to require significant computational power, an understanding of how to tune your model, and often significant post-production CGI to improve the final result. Good examples of a sophisticated deepfake requiring all these inputs are the “Tom Cruise” TikTok videos you may have seen!

However, even with current limitations, humans are already being tricked by simulated media. As an example, research showed that people could not reliably detect current forms of lip movement modification, which are used to match someone’s mouth to a new audio track. This means humans are not inherently equipped to detect synthetic media manipulation.

The threats from deepfakes

In workshops led by WITNESS, we reviewed potential threat vectors with a range of civil society participants, including grassroots media, professional journalists and fact-checkers, as well as misinformation and disinformation researchers and OSINT specialists. They prioritized areas where new forms of manipulation might expand existing threats, introduce new threats, alter existing threats or reinforce other threats. They also highlighted the challenges around “it’s a deepfake” as a rhetorical cousin to “it’s fake news.”

Participants in our Brazil/Sub-Saharan Africa/Southeast Asia expert convenings and other meetings globally prioritized their main concerns that new forms of media manipulation and increasing mis/disinformation will:

In all contexts, they noted the importance of viewing deepfakes in the context of existing approaches to fact-checking and verification. Deepfakes and synthetic media will be integrated into existing conspiracy and disinformation campaigns, drawing on evolving tactics (and responses) in that area, they said.

What are the available solutions?

There is a considerable amount of work going on to prepare better for deepfakes. WITNESS is generally concerned that this work on ‘solutions’ does not adequately include the voices and needs of people harmed by existing problems of media manipulation, state violence, gender-based violence and misinformation/disinformation in the Global South and in marginalized communities in the Global North.

Can we teach people to spot these?

It is not a good idea to teach people that they should be able to spot deepfakes or other synthetic media manipulations. Although there are some tips that help spot them now – for example, visible glitches – these are just the current mistakes in the forgery process and will disappear over time. If you want to test your ability though go to: https://detectfakes.media.mit.edu/

Platforms like Facebook and independent companies will develop tools that can do some detection, but these will only be providing clues and will not be broadly available. It is important that people also focus on understanding deepfakes within a broader media literacy frame such as the SHEEP approach of the organization First Draft or the SIFT framework.

SHEEP (an acronym in English) suggests that to avoid getting tricked by online misinformation you should look at. Think SHEEP before you share. 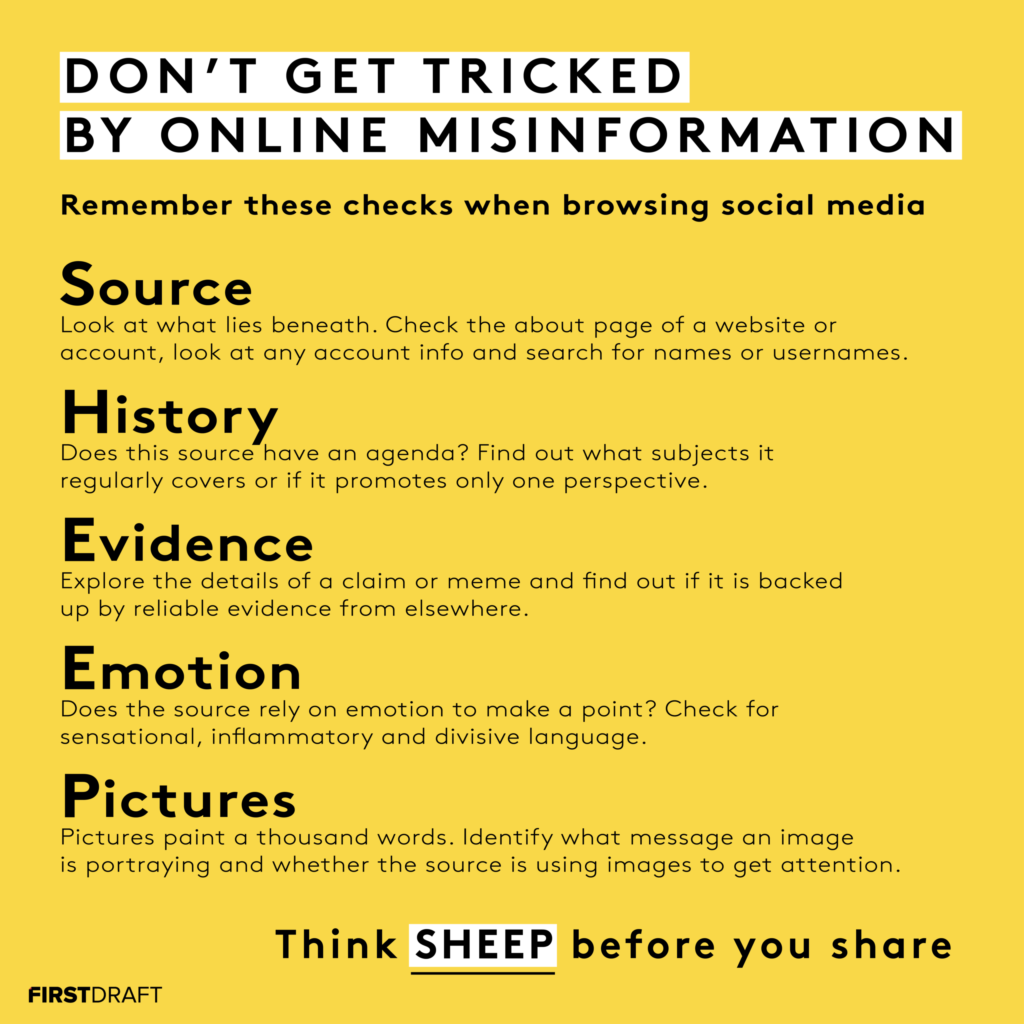 SOURCE: Look at what lies beneath. Check the about page of a website or account, look at any account info and search for names and usernames

HISTORY: Does this source have an agenda? Find out what subjects it regularly covers or if it promotes only one perspective.

EVIDENCE: Explore the details of a claim or meme and find out if its backed up by reliable evidence from elsewhere.

EMOTION: Does the source rely on emotion to make a point? Check for sensational, inflammatory and divisive language.

PICTURES: Pictures paint a thousand words. Identify what message an image is portraying and whether the source is using images to get attention. 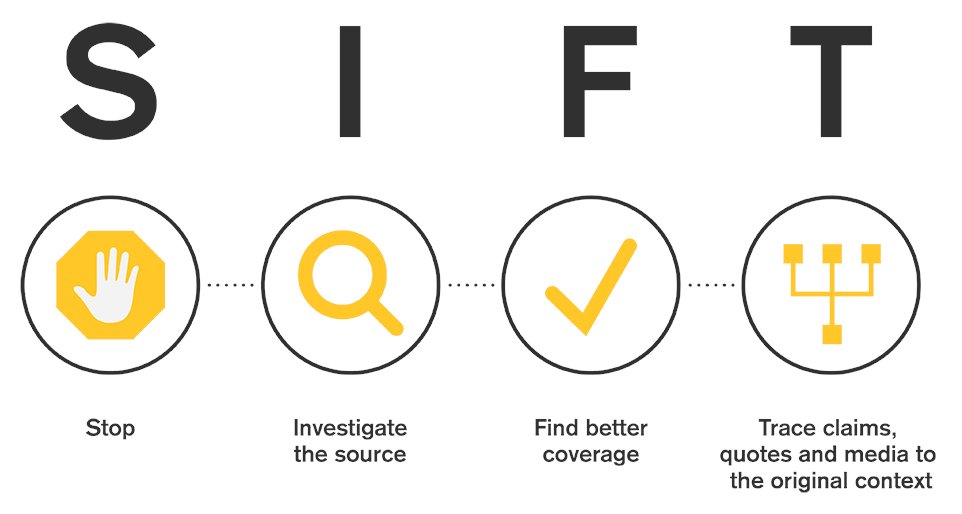 How do we build on existing journalistic capacity and coordination?

Journalists and human rights investigators need to develop a better understanding of how to detect deepfake using existing practices of OSINT (open-source investigation) and combine this with new media forensics tools being developed. Learn more in WITNESS’s report on needs, and recent work from the Partnership on AI.

Are there tools for detection? (and who has access?)

Most of the major platforms and many start-ups are developing tools for detection of deepfakes.

Some tools are starting to be released. An example from Sensity.AI https://platform.sensity.ai/deepfake-detection.

However, we recommend approaching these with caution, and as a possible signal of manipulation not a confirmation of yes/no.  Recent broad competitions for deepfakes detection have not come up with models that were effective enough on known techniques or sufficiently applicable to new techniques and most publicly available detectors will be less effective than more closed systems. And there is a challenge that even as robust tools are developed they will not be made available widely, particularly outside the platforms and media organizations. It is likely that media and civil society organizations in the Global South will be left out of access and it is important to advocate for mechanisms that enable them to have greater access to detection facilities.

Are there tools for authentication? (and who’s excluded)

There is a growing movement to develop tools to better track where videos and images come from – from the moment when they are filmed on smartphones, to when they are edited and then shared or distributed on social media. This ‘authenticity infrastructure’ can then show you can show if a photo or video has been changed, and you can decide if that is a malicious or misleading change. One example of an initiative in this area is the Content Authenticity Initiative lead by Adobe, and the recently launched Coalition for Content Authenticity and Provenance (C2PA) .

However, there is a risk that tools that are developed to better help track the origins of videos and show how they have been manipulated may also create risks of surveillance and exclusion for people who do not want to add extra data and information to their photos and videos, or cannot attribute the photos to themselves for fear of what governments and companies will do with this information. These tools will also likely work best with newer technologies. WITNESS explores more about these in a recent report on ‘authenticity infrastructure’: https://blog.witness.org/2020/05/authenticity-infrastructure/ and continues to be involved in efforts to ensure these approaches protect human rights. We analyse the Content Authenticity Initiative on how it addresses some key issues.

What should platforms do?

Key elements of these policies include

Facebook’s policy: https://about.fb.com/news/2020/01/enforcing-against-manipulated-media/ is specific to deepfakes rather than other forms of video or photo manipulation.

This policy does not extend to content that is parody or satire, or video that has been edited solely to omit or change the order of words. Other misleading manipulated video can be referred to/or picked up by their third-party fact-checkers.

Audio, photos or videos, whether a deepfake or not, will be removed from Facebook if they violate any of our other Community Standards including those governing nudity, graphic violence, voter suppression and hate speech.”

Twitters indicates you may not deceptively share synthetic or manipulated media (not just deepfakes but also other forms of manipulation) that are likely to cause harm. In addition, we may label Tweets containing synthetic and manipulated media to help people understand their authenticity and to provide additional context.

They focus on three key questions which determine whether they may or will label the content or remove it.

TikTok “prohibits digital forgeries (Synthetic Media or Manipulated Media) that mislead users by distorting the truth of events and cause harm to the subject of the video, other persons, or society.”

Platforms should be proactive in signaling, downranking – and in the worst cases, removing – malicious deepfakes because users have limited experience of this type of invisible-to-the-eye and inaudible-to-the-ear manipulation, and because journalists don’t have the ready tools to detect them quickly or effectively. But addressing deepfakes does not remove the responsibility to also actively address other forms of ‘shallowfake’ video manipulation like mislabeling a real video or lightly editing a real video

Some ongoing questions that relate to the policies: How will both Facebook, Twitter, TikTok and others ensure that they are accurately detecting deepfakes? How will they ensure they make good judgements on when a modification is malicious or whether something is masquerading as satire or parody? How will they communicate what they learn to sceptical consumers? How will they make sure that any decisions they make are subject to transparency and appeal because of the inevitable mistakes?

What should lawmakers do?

Governments are just starting to legislate around deepfakes. These laws relate to both non-consensual sexual images as well as usages for deception and mis/disinformation.

In the US a number of laws have been proposed at the State and Federal level. In the Asia-Pacific region two examples are the laws in the People’s Republic of China that ban deepfakes and other ‘fake news’ and recently proposed legislation in the Philippines. One caution about these laws is when they make a very broad definition of audiovisual forgery and include important forms of free expression like satire, or give broad discretion and power to governments to decide what is ‘fake’