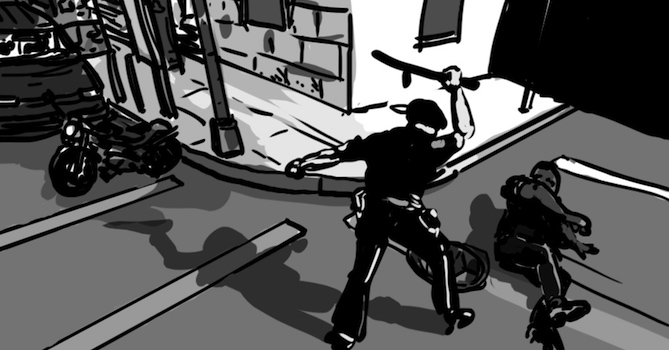 Editor’s Note: This is the first in a series on WITNESS’s Ethical Guidelines for Using Eyewitness Videos in Human Rights Documentation and Advocacy. Check back each Wednesday in the coming weeks for guidance on one of the topics covered.

Imagine this scenario. You’re are a television news producer, and a video has gone viral showing two security guards at a local college campus assaulting a young man and calling him homophobic slurs.

You are planning a news segment on the issue, and have already talked with witnesses who corroborate that the video authentic.

In the fields of journalism, human rights, and documentary filmmaking, there is a tradition of ethical practices aligned with the desire to “minimize harm” to the individuals and communities whose stories we tell. These practices include obtaining the informed consent of individuals interviewed and filmed, and assessing the potential risks involved in documenting and sharing their stories.

But when a reporter or researcher is not involved in producing the footage, and instead finds it online or from secondary sources, it can be difficult if not impossible to assess whether individuals gave their consent to be filmed, and if sharing the video to a wider audience could cause harm.

The example above illustrates the types of new ethical dilemmas we face as eyewitness media–often called “citizen journalism,” or “UGC”–becomes a common part of our information ecosystem. In the first of our Ethical Wednesday series, we’re addressing how to assess and minimize risks to those captured in eyewitness footage. This post is liberally excerpted from WITNESS’s Ethical Guidelines to Using Eyewitness Video in Human Rights Documentation and Advocacy, which you can download in full here.

Assessing Risk in the Absence of Informed Consent

In the absence of clear indicators of informed consent in a video, you must make a professional judgment about whether using that footage could violate the security, privacy, or dignity of the individuals or communities filmed, or otherwise put them at risk of harm. Take the following steps to assess the potential risks to those filmed. Then weigh the different factors to decide how to curate the footage while minimizing those risks.

Visual clues can help a viewer assess whether individuals consented to the recording. Was the video was recorded in a public or private setting? Does the subject appear aware of the camera? Be particularly sensitive to vulnerable populations such as prisoners, children, and the mentally impaired, as they may not be fully cognizant of the risks to being on video, or possess the autonomy to decide whether or not to do so.

However, even if visual clues suggest that those filmed are aware of being on camera, or willing to be filmed, it is nearly impossible to determine whether they gave their informed consent to the recording. For instance, in the example above, the young man lacked the ability to “opt-out” of being filmed.

Informed consent depends on an understanding of the purpose and audience of the footage. If a person granted informed consent to the original recording, that consent does not carry over to unanticipated future uses. For instance, a prisoner may consent to a recording taken in his jail cell for use in a human rights report, but not for that same footage to be used for entertainment purposes.

When considering the consent of individuals to share their images, identities, and stories, ask whether the recording was made with the understanding that it would be shared for a particular audience and/or use. How would increased exposure impact the privacy, dignity, and security of those involved in the video?

Consider what harm could result from sharing footage publicly. Keep in mind that notions of privacy and risks of violence, social marginalization, and repression are not uniform from one society or culture to the next. Consult with someone sensitive to the social norms and security situation relevant to the community where the recording takes place to gauge the potential that sharing the footage would violate individual privacy or put people or communities at risk.

Just because footage of abuse exists doesn’t mean it must be shared publically, if doing so could potentially cause harm to the individuals filmed. You can choose not to show the footage, and instead provide your audience with a description of it. Alternatively, you can take steps to obscure the identities of individuals in the videos.

The scenario at the top of this post is not hypothetical. The beating of a young man, presumed to be gay, took place in a college classroom in Jamaica, while a crowd of people watched through the windows. While the footage exposes abuse, publicly distributing the raw video is problematic for a number of reasons.

Though the video could be found online, local broadcasters made the decision to blur the student’s face when showing the footage on television. While this response addresses some of the aspects of potential harm involved in the video’s distribution, it is an imperfect decision. The victim still had to endure his experience being played out on national television, even if his identity was kept private. The news networks weighed the potential harm of broadcasting the video with the news value of exposing homophobic violence on the university campus, and made the professional judgment to expose the abuse while minimizing harm.

For more guidance, see WITNESS’s Ethical Guidelines for Using Eyewitness Videos in Human Rights Reporting and Advocacy. Share your own methods and challenges in using eyewitness video by reaching out on Twitter or sending an email to feedback [at] witness [dot] org.