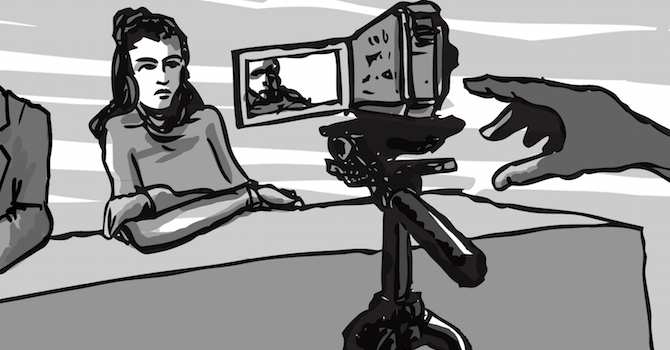 Ethical Wednesdays: When Media is Created by the Perpetrators of the Abuse

Editor’s Note: This is the third post in a series on WITNESS’s Ethical Guidelines for Using Eyewitness Videos in Human Rights Documentation and Advocacy. Check back each Wednesday in the coming weeks for a new post on human rights video and ethics. For additional posts from the series, click here.

Imagine the following scenario. You are a human rights activist, and a cellphone video has been uploaded anonymously to a liveleak website showing prison guards forcing inmates to strip naked and perform dehumanizing acts. You are able to confirm with a prison employee that the footage is authentic. You write a press release calling for prison officials to be held accountable.

This is a scenario that is becoming increasingly common, as acts of human rights abuse are filmed and shared online, sometimes by the same people responsible for the abuse.

Perpetrator footage is one of the most challenging ethical dilemma for reporters, activists and human rights monitors to deal with. Whether the footage is produced and shared intentionally, as we’ve seen from videos by terrorist organizations that publicize executions on YouTube, or is filmed by abusers but leaked to a wider audience, as the example above illustrates, there is something about viewing and sharing footage taken by perpetrators that just doesn’t sit quite right.

In this edition of our Ethical Wednesdays blog series, we’ll address why that is, and the various considerations to make when using perpetrator footage of human rights abuse. You can read the entire Ethical Guidelines for Using Eyewitness Footage in Human Rights Reporting and Advocacy, which this post draws from, at this link.

When human rights abuse is filmed by the abusers, journalists and advocates are faced with the challenge of reporting on the abuse without furthering the objectives of the abusers. Below are a few examples:

For viewers, including activists, reporters, and researchers, asking themselves if and how to share this footage, it is helpful to question the intent of the filmers or uploaders.

However, what is true of most perpetrator videos is the victimization of the subjects. Not only is the victim unable to consent to the recording; he or she is documented in a vulnerable and often dehumanizing situation. For such an experience to be shared publicly on video can cause psychological trauma. By exposing their identities, videos can also put them at risk of further discrimination and abuse.

When the footage from Malaysian prisons aired on local television, one of the survivors, by then released and at home, recognized herself on screen. “I was surprised and angry and embarrassed all over again,” she told the Washington Post. Even though she was glad the videos brought the abuse to the public’s attention, she asked that people stop circulating them.

When an eyewitness video could potentially harm the individuals or communities filmed, take steps to minimize that risk when reporting on the abuse. For example, when Human Rights Watch reported about abuse of the LGBT community in Russia, it produced a video using clips of perpetrator footage in which the faces of the abused men were blurred to keep their identities private. Many newspapers report on hostage and execution videos without sharing or linking to the videos so as to avoid complicity in the political or financial objectives of the hostage-takers.

For more guidance, see WITNESS’s Ethical Guidelines for Using Eyewitness Videos in Human Rights Reporting and Advocacy. Share your own methods and challenges in using eyewitness video by reaching out on Twitter or sending an email to feedback [at] witness [dot] org.