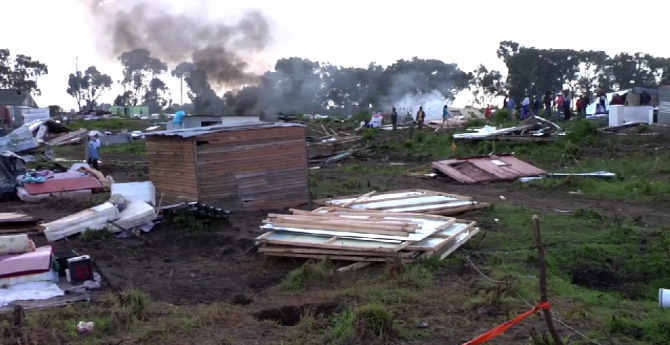 On June 3, 2014, 800 residents in the Cape Town community of Lwandle were suddenly and forcibly evicted from their homes. Crews of police and private contractors destroyed their dwellings, as documented in the video below by the South African community journalism project, GroundUp. Security forces used tear gas, water cannons, and rubber bullets, and arrested 11 residents.

“I lost everything,” one former Lwandle resident told GroundUp, “and I do not know what’s going to happen to me.”

The mass eviction of Lwandle is one of several cases in Cape Town this year in which security forces have used violence to vacate and demolish neighborhoods comprised of informal housing. Last Friday, riot police fired live ammunition against unarmed residents resisting the eviction of a settlement in Philippi East, striking one man in both legs.

A week earlier in the nearby community of Marikana, dozens of shack dwellers were forcibly removed from their homes by Cape Town’s Anti-Land Invasion Unit. According to GroundUp, residents settled on the land just 72 hours prior to the eviction, but were “beaten and humiliated” by authorities, as documented in raw video from the scene.

As violent evictions continue in communities throughout Cape Town, the legality of the Lwandle mass eviction and conduct of authorities carrying it out has come under scrutiny. The South African National Roads Agency (SANRAL), which claims ownership of the land, asserts that it was granted permission from the Western Cape High Court to remove residents in order to build a bypass, but the meaning and legitimacy of that ruling is in question.

However, local advocacy organizations have pointed out that SANRAL provided the court no plans for the bypass, but did provide a letter from nearby residents complaining about the noise, lack of sanitation, and other issues they said emerged from the Lwandle settlement. “We appeal to the authorities to please step in and remove the unlawful squatters from this area,” stated the letter.

These and other questions concerning the Lwandle eviction compelled the City of Cape Town to launch an official inquiry into the matter. Dozens of residents have testified to the commission so far, describing the confusion, violence, and fear they experienced as their houses were destroyed.

“They told us all to get out of our homes. Police wouldn’t listen to our ward councilor who asked them to stop,” Xoliswa Masakala told the commission. “They just started shooting at people. The children were crying. They were so traumatized.” Masakala broke into tears after she was asked to comment on photos of herself taken during the evictions that showed her exposed upper body. She reported that the police ripped her clothing while she attempted to intervene in the arrest of her husband.

Another resident, Thobeka Matakana, reported being shot in the waist by police while carrying her two month old baby.

In addition to GroundUp’s videos of the Lwandle eviction, it is believed that the police are also in possession of footage that may help paint a fuller picture of the abuse residents have described. On August 8, the chair of the commission of inquiry said that police were withholding such video and other necessary documents relating to the case.

In the debate over the legality of Cape Town’s evictions, authorities have called into question whether or not small, hastily built shacks legally constitute “homes,” which are protected from eviction under South African law. It is unclear how the Anti-land Invasion Unit defines a home and how it decides which houses can be targeted for demolition.

Even if the evictions in Lwandle and East Philippi were lawful under the South African courts and constitution, local advocates assert that the government has failed to provide alternative housing for impacted communities. Residents of Lwandle were promised that the city of Cape Town would provide emergency housing for them, yet according to a video report by the Daily Vox one month after the June eviction, those promises fell short.

For many South Africans, Cape Town’s latest series of violent and legally questionable evictions are the continuation of a long saga of forced displacement in South Africa, spanning from the Apartheid regime to the relocation of thousands of people for the 2010 World Cup. In a landmark ruling earlier this year, Western Cape High Court Judge Patric Gamble wrote that the violent eviction of an informal settlement by Cape Town authorities was “reminiscent of the well-documented operations conducted by the apartheid government in the 1980’s.” He declared the city’s conduct unlawful and unconstitutional.

For more videos on forced evictions in South Africa, see this playlist on the Human Rights Channel. For those facing forced eviction, the Forced Eviction Advocacy Toolkit is a resource from WITNESS and Amnesty International to help activists use video as a tool to document violations and advocate for their right to adequate housing.

Charlotte Gilliland is a student at Tufts University and is interning with the Human Rights Channel at WITNESS. Follow her @cgilliland07.