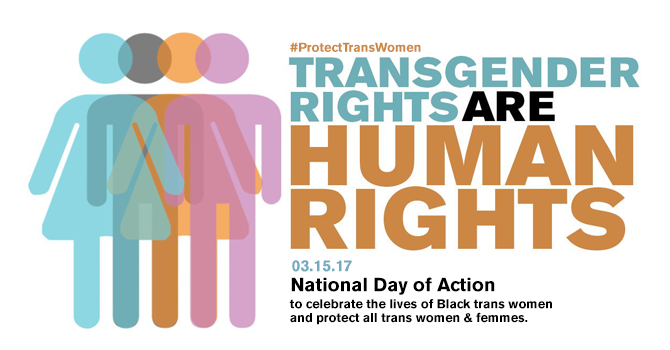 National Day of Action for Trans Women of Color

Today WITNESS joins Get Equal and transgender rights activists, allies and advocacy organizations around the world in a National Day of Action to Celebrate the lives of all Black Trans Women and Protect all Trans Women and Femmes.

We are committed to exposing the impact and imminent dangers posed to transgender and gender nonconforming communities by prevailing cultural biases, institutional discrimination, religious bigotry, and, especially, the Trump administration’s hateful rhetoric and policies.

WITNESS is working with trans-led organizations, allies and activists to expose the systemic abuse of transgender and gender nonconforming people — especially trans people of color — and to help them safely and ethically use video in their advocacy.

Our latest Media Lab, project “Capturing Hate”, studied eyewitness videos of transphobic violence and the viewer engagement with them as a new and arguably more compelling source of data that exposes the life-threatening environments trans people navigate daily.

The study found hundreds of videos made not with the intention of exposing or prosecuting abuse but rather, content that is captured, shared, and engaged with as entertainment.

Shockingly, the 329 videos analyzed were viewed over 89 million times, shared over half a million times and rated favorably by 99% of the people who viewed them. Major brands have advertising adjacent to the content and 39% of videos found on YouTube were labeled as entertainment or comedy. Most alarming are the vitriolic comments and the ongoing engagement with the videos years after their original posting.

The comments by viewers show a widespread sentiment of transphobia that not only condones violence but actively encourages violent attacks against gender nonconforming people. In many of the videos, bystanders can be heard cheering on the fights and shouting hate-filled epithets.

The “Capturing Hate” project shows that acts of violence against trans people are not only tolerated, but encouraged and glorified. We want our leadership, our communities, our family, friends and colleagues to fully understand the superhuman courage it takes for transgender people to be themselves in this world. And, to appreciate the strength and resiliency in how they confront that discrimination.

Just as eyewitness video of police brutality in communities of color in the U.S. removed plausible deniability and launched a worldwide movement demanding transparency and change, it is our hope that our findings and our ongoing work with allies and activists helps to raise greater awareness and spark discussion of the cultural and political climate that is fostering discrimination.

WITNESS is committed to disrupting the acceptance of hate against transgender communities and voicing the demand for laws and policies that protect them. We will continue to make this work a priority until all transgender and gender-nonconforming people can inhabit a world that is safe and accepting.

Please join us in celebrating the lives of Black Trans Women and in protecting All Trans Women and Femmes by participating in an action in your community, voicing your solidarity on social media, and sharing our “Capturing Hate” project with policymakers, elected officials and your local media outlets.