WITNESS has been working with allies in Rio at full force in the last two weeks, documenting the alternative social justice realities of the Rio Summer Olympic Games. In this blog, we highlight our work on livestream and eyewitness media curation through two related projects: our pilot of Mobil-Eyes Us and Alternative Rio Live!

The Mobil-Eyes Us initiative has been testing out how we can bring audiences and ‘distant witnesses’ into livestreams, provide them good context and translation, and offer meaningful ways to act. We’ve been trying out the idea of ‘action tags’ (indicated by an ^) such as ^makevisible and ^bepresent – which ask viewers to respectively share the video as it happens so that it is seen by more people. We’ve also asked viewers to be counted by our use of the tool witnesswith.us to physically represent number of viewers on site with a visible viewer count on the stream. We’ve also been pulling people from activist networks who are not physically on-site to provide ^context and ^translate. And we’ve been pushing requests to join these streams via SMS to individuals who’ve signed up to be part of our ‘distant witnessing corps’, as well as making these asks of people who join our public stream via a Facebook alert, by discovering it on Facebook Live Map, via Periscope’s map, or #Rio2016 channel.

You can see some of our livestreams from Vila Autódromo on Facebook and Periscope, and from Favela Penha on Facebook Live in the Discussions tab here and on Periscope here, here and here. Yesterday we livestreamed from the community of Favela da Skol, a community evicted almost six years ago,  still not re-housed and now cut-off from housing subsidies as Rio’s city finances collapse. Find it here in multiple Facebook Live streams: 1, 2, 3, 4. 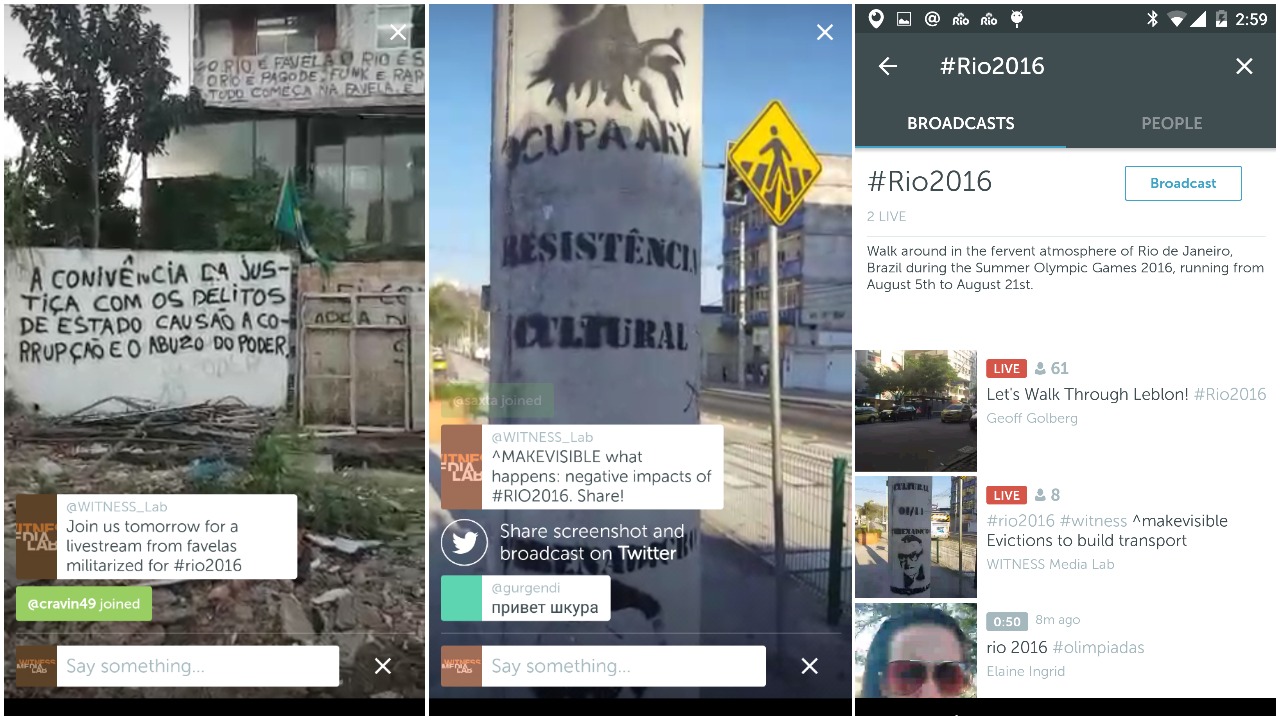 Periscope from Mobil-Eyes Us in #Rio2016

The WITNESS Media Lab created the Alternative Rio Live! site to test out how to better curate across a diverse issue landscape of eyewitness media and particularly live video that bring to light the alternative realities of human rights violations related to the Summer Games in Rio. We’ve been using Deepstream, Crowdvoice and Timeline to do this. You can explore a Deepstream (a way of curating livestreams with additional context of maps, tweets, videos, photos and weblinks) of our broadcasts from Favela Skol on our site and the screengrab below. 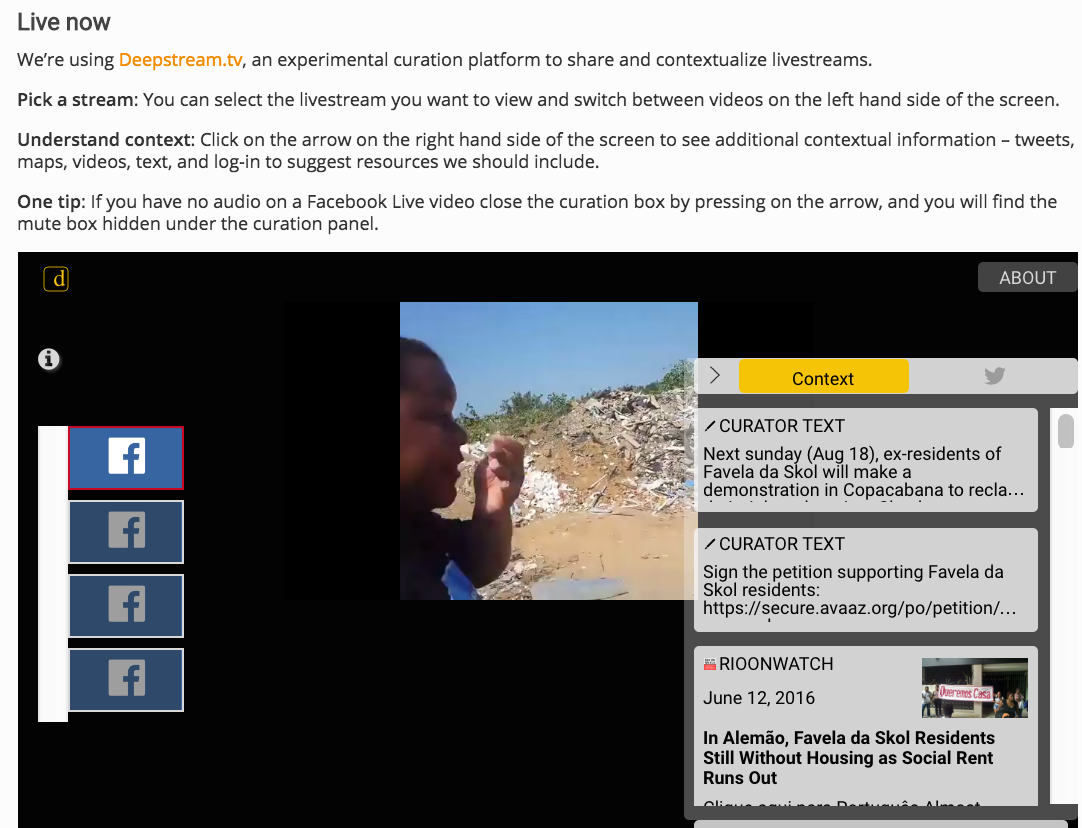 The Olympics’ first 10 days were marked by protests during the time of the Opening Ceremony, repression of free speech in the stadia, and police incursions in favelas near the main highways in Rio, where at least 10 people died in the operations. In the communities evicted to make way for the Olympics and for real estate speculation those who remain continue to try and fight for visibility, including in Vila Autódromo, right next to the Olympics media center. We documented many of these using our Timeline and a series of Deepstream pages on the site. 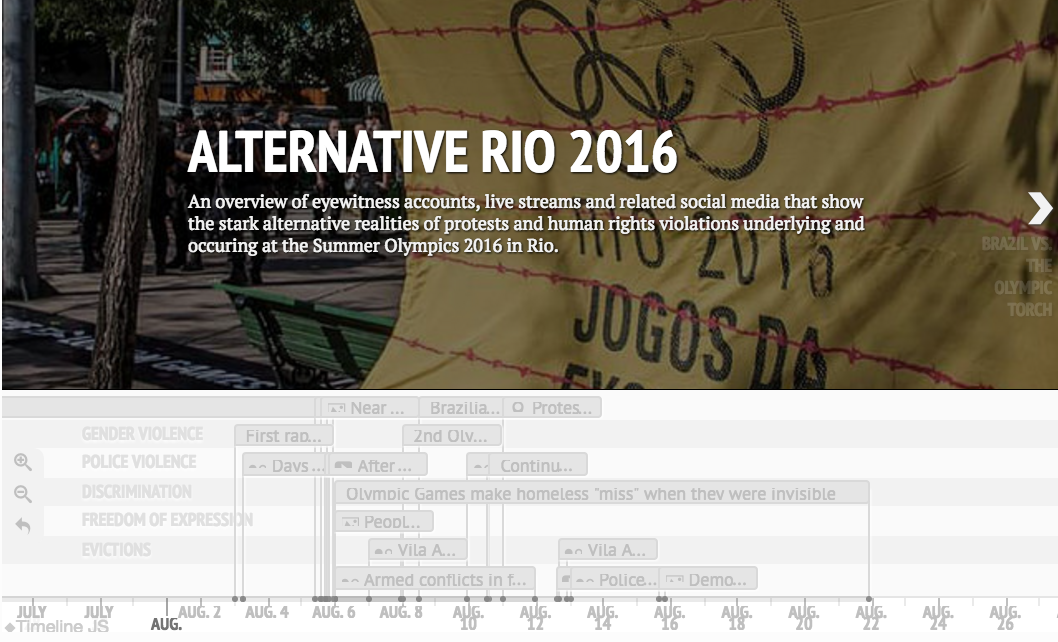 This weekend will be a busy one for both projects as we prepare for the Summer Olympics Closing Ceremony and a series of public actions.

On Saturday we will be alongside favela residents as they launch the #FomeDeViver campaign to call for an immediate halt to the violent police operations in favelas, the suspension of the use of the “caveirões” (armored vehicles), reparation for the damages and justice for the families of those killed in police operations.

And on Sunday we’ll be streaming live from Copacabana beach as the residents of Favela Skol occupy a stretch of sand opposite the iconic Belmond Copacabana Palace to call public attention to the state’s failure to rehouse them.

In both cases we’ll be using a range of livestreaming tools to bring you experientially closer to what is happening – multi-camera livestreams, we’ll be testing out a 360 live video, and contextual curation on Deepstream. And more importantly, we’ll be asking you to join these frontline activist community in order to ^makevisible and ^bepresent with them in their struggles. We’ll be asking people to share the streams widely, to try to push up the viewer count that we will be showing on-site, and to respond to specific requests from these activists in terms of petitioning and public attention. On live.witness.org and on Mutirao television we’ll be experimenting with live curation of multiple streams, of streams with context (such as links, videos, photos, maps and curators’ notes) on Deepstream,  and we’ll be continuing to maintain our Timeline of key social media and eyewitness account of rights violations.

Finally, if you haven’t yet seen it check out our collaboration with the Mutirao 2016, a collective of Latin American media activists (first sparked by conversations at the Latin America Video4Change convening in 2015) which is running live radio and TV from Rio every day. You can see my colleague Jackie’s latest Dispatch from Rio here with more detail on their activities!

Update August 23, 2016: Over the weekend we livestreamed a surprise protest at the heart of the Olympic Boulevard, where young favela residents who were participating in the #FomeDeViver campaign around increased police violence in their communities, unfurled a banner just after Brazil clinched the soccer Olympics Gold Medal on the big screen. We engaged remote viewers with clarifying commentary and calls to ^MAKEVISIBLE and share further.

We’re also continuing to build a storytelling arc around the evicted community of Favela Skol, whose ^CONTEXT we shared in the livestreams above. Their occupation of Copacabana beach was postponed due to heavy rain but we’re planning on supporting them, and trying out a range of our Mobil-Eyes Us tools, in similar events leading up to a public hearing on August 31st.