Storytelling in livestreamings: the Favela da Skol case in Brazil

Mobil-Eyes Us is a project of WITNESS and the WITNESS Media Lab to explore potential new approaches to livestream storytelling for action. We look at technologies, tactics and storytelling strategies to use live video to connect viewers to frontline experiences of human rights issues they care about, so they become ‘distant witnesses’ who will take meaningful actions to support frontline activists.  We have developed a series of storytelling experiments, in collaboration with favela-based human rights activists in Rio de Janeiro, which has lead to an app. This app, Mobil-Eyes Us (which is in its alpha stages), enables an activist group to curate a series of eyewitness Facebook livestreams and push these to the relevant people in their network to watch and take individual or collective action. They would be able to rapidly share a stream so more people are present and witness an incident,  help translate, provide guidance or give context.

These blog posts are part of our exploration of effective new approaches to livestreaming storytelling, the technologies that can support this and how both can be linked to effective ‘distant witness’ action around livestreamings as part of the Mobil-Eyes Us Project at WITNESS and the WITNESS Media Lab.

Mobil-Eyes-Us teaches us that a series of live broadcasts can form (and be formed by) many layers composing a rich story arc that tells us more than one individual stream can. So we explored ways to present a series of live videos combined with the context created through the active forms of participation depending on different abilities and availabilities of distant collaborators. Our assumption was that the more people know about the “big picture” ( a local group’s larger story of struggle), the higher the chances of their active and meaningful involvement.

Since the first phase of Mobil-Eyes Us (MEU) in 2016 we wanted to have a series of informative videos about the history of communities affected by the Olympic Games  (and by the broader patterns of violence that existed in the lead-up) that could be shared to build a more complete understanding of resident experiences. These videos individually could give a glimpse of their reality, but can also serve as a piece of context on previous or future streams.

Favela Skol is part of Complexo do Alemão, one of the main favelas of Rio de Janeiro. Here’s how we  engaged audiences in ‘co-presence’ during live streaming:

In this first video we presented details about Complexo do Alemão’s history.

Thainã de Medeiros, from Coletivo Papo Reto, summarizes the area’s history and giving information about the terrain, the occupation of the land and the supposed reasons for the eviction. He also talks to residents about their personal stories,  and familiarizes the audience about a series of actions they had done before and during the Olympic Games Collaborators engaging with the MEU process remotely have a solid base of knowledge to work with and can start including links and information in the comment sections from the streamings that followed on that day.

During the second live video of the day it was also possible to add to what they said in the broadcast comments with links like:

Thainã gives more details about the eviction process in the third live streaming. He also interviews Cristina, a resident who lost her home due to landslides during the heavy rain season at Pedra do Sapo, a favela within Complexo do Alemão, between the years of 2009 and 2012, which was the same period that evictions happened at Favela da Skol. We then summarized what had been presented in the comment section for further context, including the link to the residents’ petition and a link to the article from Rio on Watch about Skol’s eviction.

In the fourth and last live stream of the day, we continued Cristina’s interview, and also learned from Camila, a resident and well-known activist of Skol’s struggle, that there would be a planned action on Copacabana beach the following Sunday, the last day of the Olympic Games. In addition to updating the comments with summary and context, we also added a link to the Facebook page maintained by Camila so that people could connect with her directly. We referred our followers to live.witness.org both during the narration of the broadcast as well as in the post’s comments.

We created two Facebook events, one in English and one in Portuguese, to publicize our previous broadcasts as context to Camila’s planned action at Copacabana beach during the closing day of the Rio Olympic Games . However, because of bad weather, the action was canceled, so we decided to update the respective Facebook event pages accordingly.

With the update, we also gave a notice that in 8 days there would be a public hearing where Favela Skol residents and other evicted Rio communities would demand officials honor the promises made of compensation for their evicted homes and new housing with concrete dates to begin construction work.

MEU also created events on Facebook(in English and Portuguese) for supporters to accompany the hearing remotely through a livestream. During this livestream above  of the hearing, Camila confirms that the leaderships from Pedra do Sapo, Itaoca, Skol and Palmeira are present. Tactically, it is important make it clear that leaders are present and are always willing and open to dialogue with responsible institutions and to have this documented to keep records straight.

We were able to remotely follow the public audience and hear their demands through a series of four live broadcasts that included narration and translation in English via a MEU participant watching remotely. Public hearings are often events where attendees have strongly differing opinions, but this specific one  was louder and more frustrating than usual. Because the reserved room was so full, many residents who had attended to follow the frustrated attempts to hold state institutions accountable had to watch the hearing from a separate room.

COMMUNITIES PROVIDING THEIR OWN CONTEXT

From August to October 2016, some residents re-occupied part of the land where Favela Skol was located. As seen through the live streams from the Voz das Comunidades page (another important local news group in Complexo do Alemão) the military police was present before Rene Silva (streamer and creator of Voz das Comunidades) was arrested by Police. We highlight this comment made by Camila, who was interviewed in previous broadcasts, where she contextualizes the situation during the stream : 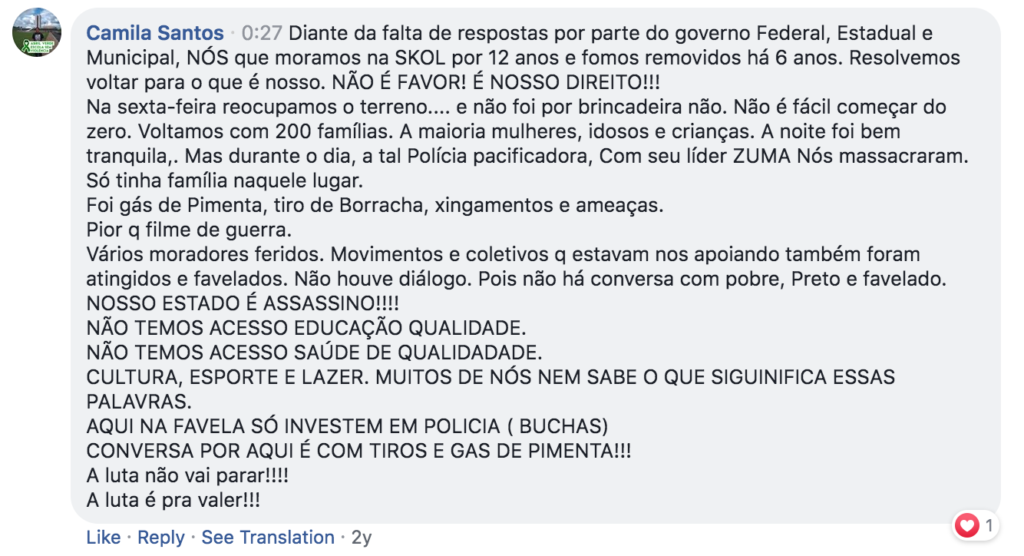 “Faced with the lack of answers from the Federal, State and Municipal government, WE who lived in SKOL for 12 years and were evicted 6 years ago. We decided to go back to what is ours. IT’S NOT A FAVOR! IT’S OUR RIGHT !!!

On Friday we reoccupied the land …. and it was not as a joke. It is not easy to start from scratch. We returned with 200 families. Mostly women, seniors and children. The night was calm and peaceful. But during the day, the pacifying Police, with their leader ZUMA, we were massacred. There were only families in that place.

Worse than a war movie.

Several residents are injured. Organized movements and collectives who were supporting us were also hit and beaten down. There was no dialogue. Because no one talks to poor, Black and favela residents.

OUR STATE IS MURDEROUS !!!!

CULTURE, SPORTS AND LEISURE. MANY OF US DO NOT KNOW THE MEANING OF THESE WORDS.

HERE IN THE FAVELA THEY ONLY INVEST IN POLICING (SUCKERS)

THEY DIALOGUE  HERE WITH SHOTS AND PEPPER GAS!!!

Another important part of the narrative arc of live streams is the opportunity to also share moments of joy and celebration. Reflecting on the nature of activist struggles, we know the importance for both affected communities and people acting in solidarity to have moments to celebrate even small victories

Within our MEU piloting we look for opportunities to bring these to co-present audiences.  In the case of Favela da Skol we had the chance to be present at a Coletivo Papo Reto live broadcast of a 2017’s Easter party for approximately 200 children organized by mothers and supporters of favela da Skol. Later in August 31, 2017, the federal, state and municipal governments invited community leaders heard by the Rio Public Defenders’ Office for the Launch Ceremony to call out development companies in order to create new homes.

A STREAM AS A NODE OF A LARGER NETWORK OF STORIES

In this first experiment of the Mobil-Eyes Us methodology in Brazil, we created a narrative arc using live streamings about the evictions that happened in Favela da Skol in the context of of mega international events in Rio de Janeiro, such as the World Cup and the Olympic Games. In partnership with Coletivo Papo Reto, a grassroots media group from Complexo do Alemão, we did four streamings in one day and followed up with more content after that. We also used Facebook Events to support the ongoing process between the different live videos, helping the audience understand the broader context involved in each case. In this first pilot, we explored the power of real time remote collaboration directly through the comment section of the Facebook live stream.

Before Mobil-Eyes Us, WITNESS partnered with Brazilian activists to collect, contextualize and verify 114 recorded (non-live) videos from different sources to connect the dots between them and demonstrate how forced evictions were a systemic issue with common patterns showing wider human rights violations. Through the live streams from the Favela da Skol experience, we are also trying to visualize the system and the patterns within it. This work taught us that context provided in one stream can be reused in another to tie both together. It showed us how one stream can serve as another’s context, connecting multiple streams as a continuation of a story or by showing us the patterns and bigger picture of what’s happening. We can help in real time by translating, giving context and being present when it is needed from us, but the work doesn’t end there. We should continue analyzing and making sense of each stream by itself, but more importantly, figuring out how each one relates to each other like a node of a network does. There are multiple stories within, and beyond, the one we’re immediately witnessing.

Context about Complexo do Alemão and the post-Olympic situation

Context with article about the public hearing in 2016