Published March, 2013 by WITNESS in Uncategorized

Citizen Video for Journalists: How to Build a Newsroom on Twitter, with Andy Carvin

The old saying that a reporter is only as good as his source is just as true for reporters relying on social media. NPR’s Andy Carvin became famous for building an online community that helped him contextualize, verify (or debunk), and translate citizen videos. The Washington Post called him a “one-man Twitter news bureau,” and the Daily Dot ranked him as the second most influential Twitter user of 2011, next to Anonymous. But how did he do it? WITNESS’ Madeleine Bair picked his brain for tips.

Twitter can be a rumor mill—or a newsroom. NPR’s Andy Carvin shares ideas for developing an informative and reliable online community for news gathering.

Andy Carvin: I find these people in a variety of ways. Whenever possible, I try to get recommendations from people I already trust, or I use people I already know. Then I look at their Twitter history to see who they first followed on Twitter, and check out those accounts, working under the assumption that the first people they followed had some particular value to them. I then look and see if they’ve created any Twitter lists on the same topic, as well as watch their current Twitter activity, to see who they’re interacting with. Pretty quickly you can get a decent pool of potential sources this way. 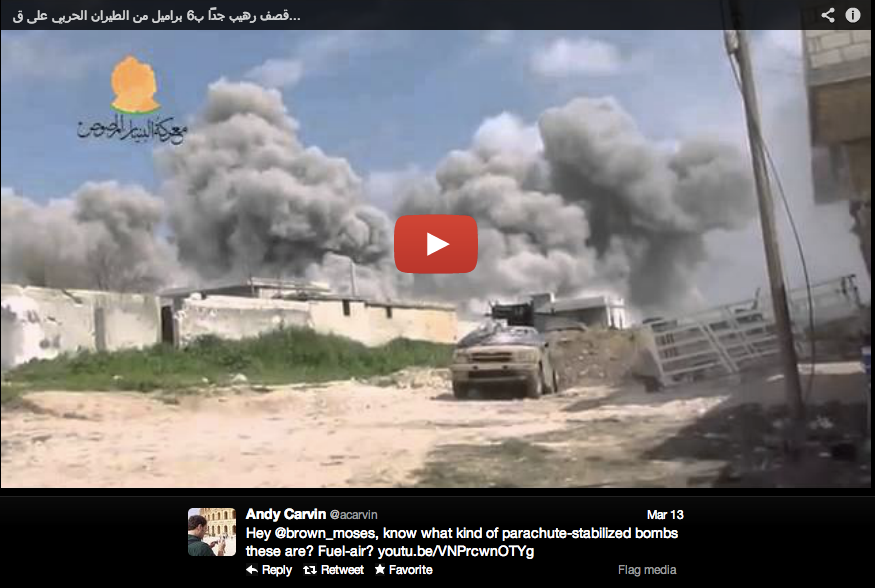 Andy Carvin: Exactly. I’m doing social networking analysis, in the most traditional, sociological sense of the word. And of course, over time, people you grow to trust will suggest more people, so the list grows.

MB: How much time does this take? The Arab Spring is a beat you developed over time and with lots of prep. What if breaking news happens on a new beat, in a new region? In that situation, how can one quickly find sources to trust online?

Andy Carvin: I can do it in real time if I prioritize certain aspects of it. For example, examining prior Twitter histories can take a while, so sometimes I look at the most recent tweets, as well as current ones. Also, my Twitter followers have reached a critical mass in which people suggest sources to me on almost any breaking news topic. They’re looking out for me and want to help.

MB: This community serves not only as sources in the traditional sense of the word…

Andy Carvin: Many of them help me do my work by translating footage, identifying accents, dialects, etc, spotting landmarks, analyzing footage metadata, etc. In other words, those folks play a role that a researcher or a production assistant might play in a traditional newsroom. 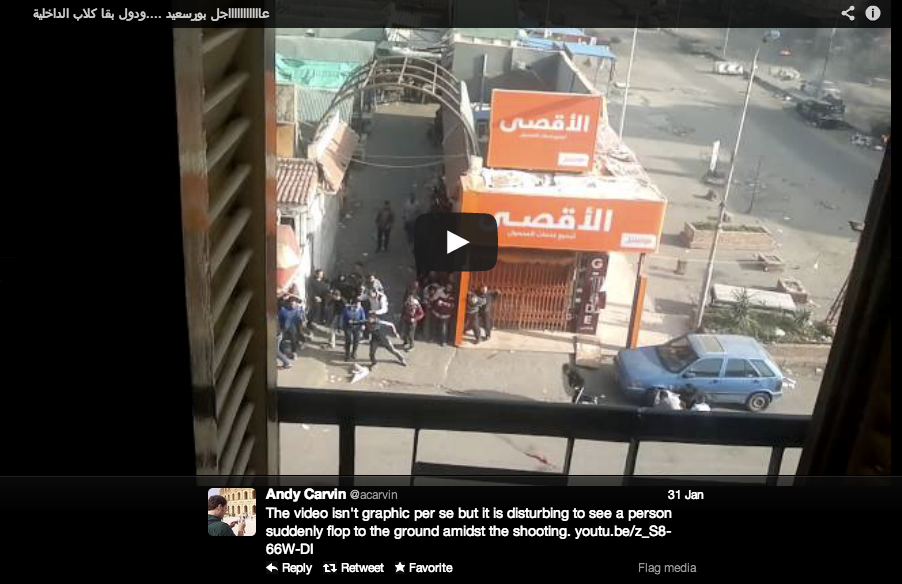 MB: Is there anything an online community can NOT do for a reporter’s research?

Andy Carvin: Not many of them have access to high-level government officials, so it would be hard to do a Bob Woodward-style investigation this way. Something like that requires serious shoe-leather journalism and really good contacts. Also, sources don’t always know the full context of an event or a piece of footage, whether they’re there in person or observing remotely. If you don’t have enough sources offering enough perspectives, or who can cross-reference each other, it can be a challenge. People also have agendas, and that can easily affect their usefulness as a source, depending on the context. That’s why it’s key to understand their possible agendas before you start to interact with them.

MB: And how do you do that?

Andy Carvin: You can usually suss out who is trying to mislead you if their tweets don’t match up with other reports you’re seeing. Or if they’re prone to exaggerating, like claiming there are 1 million people protesting when, in truth, it’s less than 100,000. A lot of biased potential sources aren’t subtle about it. They’ll write in all caps with words like CONFIRMED or BREAKING, or they’ll use hot-button terms, like calling protesters terrorists, or use propagandish phrases like “The truth behind the Syrian opposition.”

MB: Back to the limitations of reporting via an online community, if your sources are all on Twitter, all speak English, is there a risk that this community is not representative of the region you’re reporting on?

Andy Carvin: You’re assuming they’re all on Twitter, which isn’t true. Twitter is just the public face of my work. I spend enormous amounts of time on Facebook, YouTube, Skype, email, even the phone. And that’s why I employ volunteers to translate, or help me find translations – so I can keep track on what people are saying in Arabic. Obviously, it’s not as good as if I spoke the language, but it’s better than nothing. 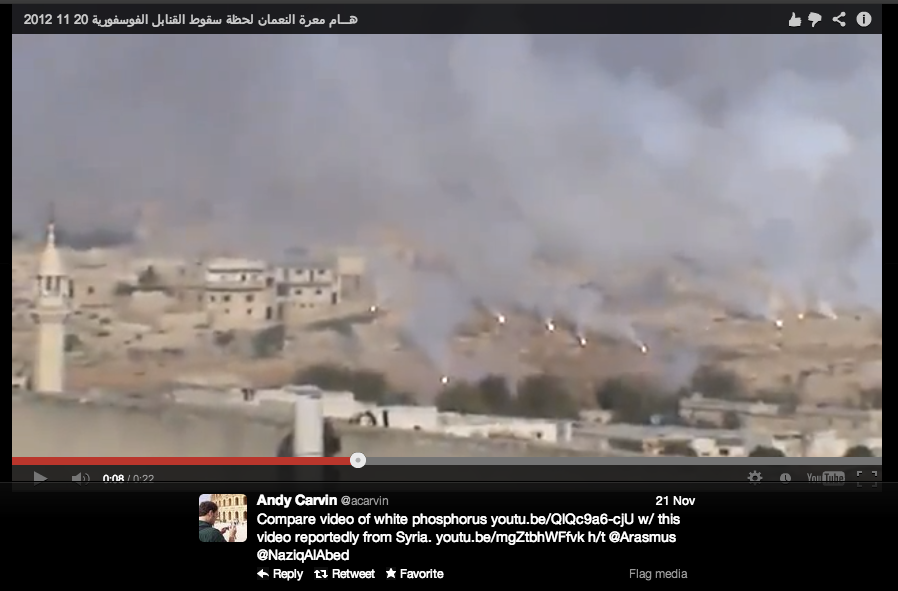 MB: And what about geographical limitations of this kind of social media reporting?

Andy Carvin: Obviously, if there’s limited access in certain places, it won’t really work. The digital divide remains a serious problem. Besides, this isn’t an attempt to replace on-the-ground reporting. It’s intended to complement it or augment it.

MB: What is the most common mistake you’ve seen reporters make on social media, and what advice would you offer to help them develop deeper communities and elicit better information online?

Andy Carvin: It’s the same mistake I see on live news broadcasts – jumping to conclusions. Just because one tweet says it’s so doesn’t make it true. Look at all the bad info that got circulated during the Newtown shooting. But much of that info also originated from mainstream media, which I think is a result of 24-hour news cycles that require constant talking and no dead air. At least when using social media, you can reflect on the rumors and challenge them. So don’t just RT what everyone else is saying; get in the mix and ask your twitter followers to help you sort out what’s true and what’s not. The rumors are spreading already via social media, so at least journalists can jump in and ask people to reflect on them instead.

MB: Finally… There’s so much noise on twitter. How do you not get overwhelmed by the firehose?

Andy Carvin: Like Clay Shirky says, there’s no such thing as information overload – there’s only filter failure. Use as many filters as you can. Curate your own Twitter lists, conduct searches on keywords that are specific as possible, search across a limited geographic radius, etc. All of these methods can help you improve the signal-to-noise ratio.

Andy Carvin is senior strategist on the social media desk at National Public Radio, is also the author of Distant Witness: Social Media, the Arab Spring, and a Journalism Revolution. He is well known for his Twitter community, which curates and discusses information on issues surrounding the Arab Spring and other current events. Follow him @acarvin or at andycarvin.com.