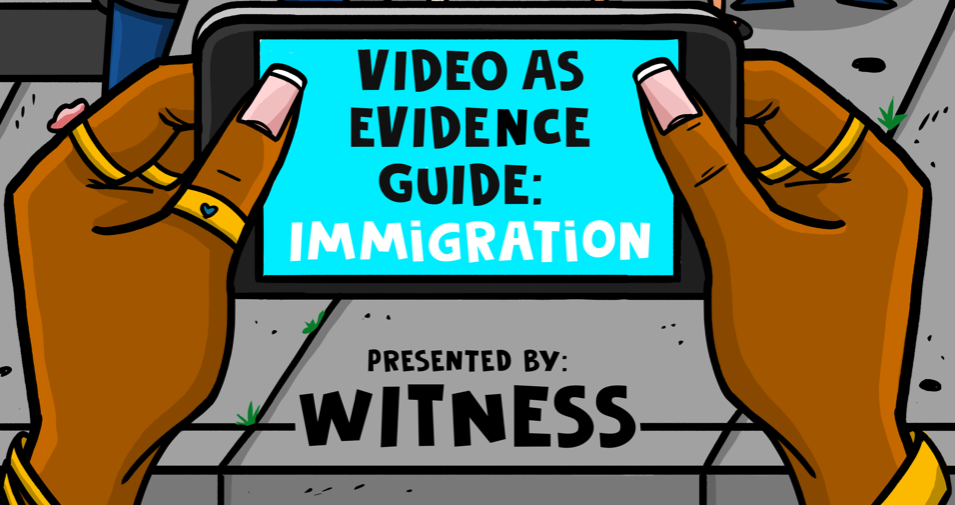 WITNESS is excited to release our newest resource for supporting immigrant rights: “Video as Evidence: U.S. Immigration“. This in-depth guide is for both immigration attorneys and community members looking to utilize eyewitness video as evidence in legal cases.  Video can be a powerful and visceral tool for defending the rights of individuals in immigration legal proceedings, but it’s not always clear how to use video for evidentiary purposes or how to film in a way that is most likely to support such proceedings. This Guide aims to help attorneys introduce video evidence that will pass legal muster in a removal hearing and support their clients,  as well as help advocates and community members safely, ethically and effectively document encounters with immigration enforcement.

Inside the Guide you’ll find in-depth research and examples, practical tips and guidance, case studies and exercises. Below you’ll find a Q&A with WITNESS’ U.S. Immigration Legal Fellow and author of the Guide, Leila Shifteh, to learn more about what the Guide is and who it’s for.

Download the full guide here. You can also access just the Legal section here, or just the Filming section here. And watch our launch event panel with the guide’s author, an immigration attorney, and longtime community filmer to learn more.

Why did we write this guide?

As U.S. immigration enforcement arrests are unlikely to cease any time soon, documentation tools like video are necessary to hold authorities accountable for unlawful tactics used during those arrests. The reality is that for individuals facing deportation (also called removal), an immigration court may grant more weight to a person’s testimony describing their arrest if strong supporting evidence is available to corroborate the facts in their testimony. Video has a strong potential to act as supporting evidence, especially as more people have cameras in their pockets.

So why did we write this guide? Many reasons! Among them are: the widespread availability of camera-enabled cell phones & the high volume of surveillance cameras in our streets; public frustration over ongoing abusive immigration enforcement practices that tear families apart; and the lack of clear guidelines in U.S. immigration court on how to introduce court-ready video to defend against deportations.

Who is this guide for?

This guide is for two main audiences: immigration attorneys (and the investigators that work with them) and community members (which encompasses a huge swath of folks including immigration advocates, allies, and people who live in communities most impacted by enforcement). These individuals can use the guide as part of their strategy to protect the rights of individuals who find themselves in removal/deportation proceedings.

While the guide is broken down into two parts (Part I is a legal guide & Part II is a filming guide), we envision that lawyers and community members will eventually collaborate in applying the practical tips in the guide. The Collection Planning exercise, for example, brings lawyers & community members together to both pinpoint exactly which legal elements need to be proven under a given case strategy (e.g. for a motion to terminate), and what type of documentary proof – whether video/photo/audio – could corroborate key facts to help advance legal arguments (e.g. video showing no consent was granted to enter a residence during an arrest and no warrant was displayed).

What is the purpose for this guide?

The purpose is to help attorneys introduce video evidence that will pass legal muster in a removal hearing challenging an immigrant’s removability. This can be achieved through the careful steps that both the attorney and community member take from the moment of filming an incident or retrieving footage all the way to when a physical copy of the video is produced for the court.

The guide contains practical tips on how a person can film safely, ethically and effectively (e.g. capturing key details like an officer’s badge and varying shots from wide to close-up); how to store footage & when and where to share it. So, for instance, when we’re normally filming on our cell phones, we might not be overly concerned about which file format or file name we use to save a clip; whereas such details can be really important in preserving the reliability of video for evidence in court.

The guide is also largely focused on legal considerations. For instance, we look at how the rules of evidence in immigration court are not as strict as they are in criminal court, which is great on one hand in terms of getting video admitted into court. On the other hand, it can be confusing for lawyers to pin down what the actual rules are for getting video admitted or granted full weight by the court once admitted. With this guide, we set out to address some of those questions with the information available on this new and evolving practice in immigration court.

Lawyers routinely ask us: in what type of immigration case is video evidence helpful? How do I authenticate video? Do I need a video expert to verify the video? What if the judge or government attorney pushes back on the introduction of video? Where in my filings should I even mention video evidence? Are there any real-life examples of video evidence in an immigration hearing? The guide attempts to answer these and other practical concerns.

Why is video a useful tool for defending immigrant rights in court?

Video can be a powerful and visceral tool for defending the rights of individuals in immigration legal proceedings. Whether we like it or not, immigrants’ voices, accounts and perspectives are often not accorded the greatest weight in immigration court. Sometimes a photo or a video can go a long way to help reinforce an immigrant’s account of how events unfolded.

While video is no magic wand, there is a whole range of ways video can be a powerful tool in defending immigrant rights in court and the guide contains a chart mapping out some examples.

How have you seen video be used effectively in immigration legal proceedings?

It might come as a surprise that immigration cases using video evidence are still limited since we do see a lot of video used in criminal and civil hearings in the U.S. But several really exciting examples do exist where video was successfully used in support of asylum, cancellation of removal and a motion to terminate to help individuals succeed in their immigration cases.

In one cancellation of removal case, a lawyer from Brooklyn Defender Services in New York successfully used video footage of an incident of domestic violence to argue that her client should be eligible for cancellation under the Violence Against Women’s Act.

In another case, an attorney successfully screened a video in New York Immigration Court in connection with an asylum claim for a person who had fled Argentina due to persecution on account of being transgender. The video she screened was a documentary film that showed police in Argentina arresting and harassing transgender women on the street. The case was successful and the individual won their asylum claim.

We also have an excellent example out of Los Angeles where workplace surveillance video captured an entire ICE raid and resulted in the termination of one individual’s removal based on immigration enforcement practices being unconstitutional and violating regulations. You can learn more about each of these case studies in our guide. Additionally you can read about this surveillance video case here.

Where can video be used in the immigration legal process?

There are many places where videos can be used!

For example, video or photo of a detained immigrant with their U.S. citizen spouse or child can help demonstrate the strength of an immigrant’s family ties and potentially count as a bond equity in the judge’s flight risk assessment of a person in a discretionary bond hearing. This can help persuade a judge that if released on bond the person does not pose a risk of not showing up for future court proceedings.

Video may be used to argue that any evidence obtained by authorities in violation of governing regulations or the Constitution should be excluded and/or the removal proceedings against a person should be terminated.

Video can also be a powerful tool when it comes to federal civil rights litigation in cases where individuals want to move beyond the scope of their immigration claim to suing for monetary damages for instance. A video walkthrough of a home capturing the scene after a raid has occurred or film of damage to a door that was kicked in by ICE could potentially be helpful evidence in a claim against the U.S. government for property damage or trespass.

What do we hope will come out of the creation of this guide?

Aside from what we outlined above, we want to motivate and inspire immigration attorneys to consider: the various possible uses for video evidence in immigration court; sharing best practices; as well as exposing obstacles and challenges that potentially stand in a lawyer’s way in the process.

Immigrants in removal proceedings face an uphill battle in winning their cases especially in the current climate. What is clear is that video documentation of enforcement abuses is currently underused in individual immigration cases. There is no better time than now for the flexible rules of evidence in immigration court to be used in support of defending immigrant rights in court.