Published July, 2014 by WITNESS in Uncategorized

The Israeli Defense Force (IDF) may have realized, as many news outlets have, that amateur footage (also known as user-generated content, or UGC) can convey a sense of authenticity and immediacy that professional production lacks. While the IDF is known for its innovative and often controversial media strategy–which includes a blog, YouTube channels, and social networks in several platforms and languages—its current messaging campaign is notable for its heavy use of  citizen footage.

Just past midnight on July 9, after the first day of Israel’s aerial bombardment of Gaza, the IDF uploaded this video to YouTube. It’s an amateur clip of an Israeli wedding the moment a rocket flies overhead. The rabbi tries to speak over the wail of sirens until a flare in the sky—a rocket intercepted by the IDF’s Iron Dome defense system—sends guests fleeing in panic.

On the Human Rights Channel, we have curated several similar videos documenting citizens’ experiences of the Israel-Palestine conflict. They convey the terror and tragedy of daily life in the region, from the rubble-torn streets of Gaza hit by Israeli airstrikes, to Israeli life interrupted by air raid sirens. What struck us about the above video was not only the substance but the uploader–the Israeli military’s propaganda arm, which presumably didn’t film the footage itself, but shared it on its YouTube channels and social networks.

Just as the news industry is grappling with questions surrounding credit, copyright, and ethics in its use of UGC, the use of citizen footage by an army’s media division raises several questions.

Who shot this footage? Did the IDF verify that it is authentic? Did the filmer grant permission to the IDF to use the video in its propaganda, and include it in the IDF’s dramatic montage of the day’s events? Are viewers supposed to perceive it as more “authentic” than the IDF’s in-house videos, because it was presumably shot by a civilian?

In the case of this video, the IDF describes it as taking place in Ashdod, but provides no link to an original source. The earliest copy the Human Rights Channel was able to locate online was a version shared on Facebook earlier that evening. “Due to security requests we are not posting the location of the wedding,” states the Israeli advocacy group that posted the clip.

The following day, the video circulated on AP newswires and was covered in outlets worldwide, from NBC to The Telegraph, with the wedding reportedly taking place in the city of Holon, which is 20 miles from Ashdod. Many news outlets credit the video to “Arakeliants Vartan,” but it is unclear who or what that source is. Was Arakeliants Vartan the original filmer? A wedding guest? The online alias of the first person to upload the footage? Like the IDF copy of the video, none of the outlets link to the original source or contain further context with which to understand the video. Without that information, the discrepancy between the two locations given for the scene remains a mystery.

The Dilemma for Viewers: How to Discern What’s Real?

Other amateur videos have been uploaded to the IDF’s “Operation Protective Edge” YouTube playlist, documenting the impact of rockets on Israeli daily life. All offer similarly minimal descriptions of what they document, and lack a link to an original source. However, each video supports the larger message Israel’s government has stood behind since the beginning of its current military operation: that rockets fired by Hamas create terror in Israeli daily life. 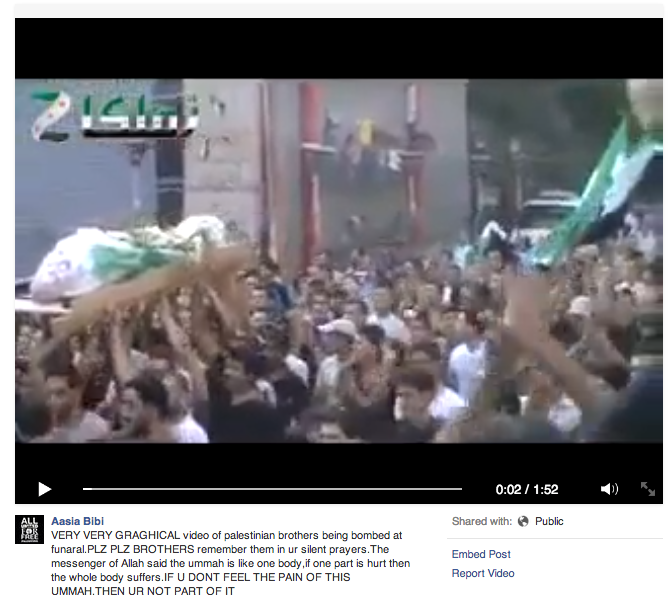 One example of a video from Syria shared on social media with a description as if it were from Gaza.

Of course, the IDF is only one of hundreds of politically motivated groups to use citizen footage to promote a message. We have written previously about the challenge of authenticating video from Syrian armed groups. Pro-Palestinian activists, for their part, have also circulated citizen footage showing Israeli airstrikes in Gaza. While many of those videos are corroborated by other reports, others have been crudely manipulated to fit a political agenda.

When multiple versions of the same footage proliferate online with differing interpretations and explanations, the challenge for the audience is to understand what filters have processed their experience of the footage, and whose version of reality it depicts.

Videos from the ground can offer a visceral window into a conflict and document abuses that reporters and human rights monitors don’t have access to. But they can just as well perpetuate propaganda wars, clouding reality with false descriptions and misleading interpretations. And when neither news outlets, government channels, or advocacy groups explain the source of footage they share, it’s hard to watch without the cynical sense that personal trauma is being exploited for a political end.

This article was written by Charlotte Gilliland and Madeleine Bair, and originally appeared on the WITNESS Blog.
Lead Image: Screenshot of video uploaded by the Israel Defense Forces to its YouTube Channel.