Published April, 2013 by WITNESS in Update

Unleashing the Power of Citizen Witnesses

Our mission at the Human Rights Channel is to not only verify and distribute citizen videos, but to find meaning in what are often blurry, fleeting images. That meaning lays not only in the content of the video, but in the story behind it. Where it is from? How was it taken? How did this, of the thousands of videos uploaded to YouTube each day, make it before our eyes?

The video of an Occupy Wall Street protest, for example, is to be expected. The video of a protest in rural Iran, where farmers clashed with security forces over water shortages, is not. The Iranian regime has been known to track down activists seen on YouTube videos.

In the past month, we’ve seen many such videos from places that, based on their scarce representation in the media, we think of as closed off or, simply, forgotten. When religious tensions in central Myanmar turned violent in late March, citizen videos helped alert the international media to the burning of Muslim villages and displacement of thousands of people. When a secessionist militia attacked a mining town in the Democratic Republic of Congo, a local reporter narrated the scene on his cell phone video, recording dead bodies before running from the shooting.

These stories from the DRC, Myanmar, and Iran are a reminder of the vast unleashed potential of citizen video to expose injustices and document untold stories. As ubiquitous as cell phone video is in the United States and much of the world, it is still just beginning to emerge in places where the technology is not so accessible, and where repression of information is rampant.

But for citizen witnesses to safely and effectively document crises, whether in Timbuktu or Ducati Park, they need the tools and skills to film, and their potential audience needs a way of seeing, understanding, and trusting their video.

Later this week I’ll be speaking at the National Conference on Media Reform with Matt Stempeck, Josh Sterns, Vivian Salama, and Wafa Ben Hassine. This potential of citizen witnesses, and how we in the human rights, media, and tech fields can create a supportive infrastructure to help realize it, is what interests me the most. For those of you who won’t be there, I want to share my thoughts, and invite yours.

For the media and news consumers, the deluge of video from nearly every corner of the globe should be a blessing. But without the tools to find footage, translate, and make sense of it, the volume of videos can become a curse. With more than 100,000 hours of video uploaded to YouTube every day, how can we assure that the recording by an anonymous Burmese villager of the pillaging of aMuslim community rises to the surface—or at least to the computer screens of news producers, politicians, and human rights investigators? 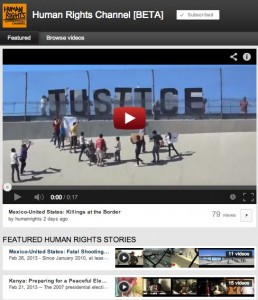 The Human Rights Channel on YouTube is one of several projects to curate and contextualize citizen video.

The Human Rights Channel is one attempt to thematically curate citizen video, along with other curation projects such as Syria Deeply and Crowdvoice. But I have to ask if human-led curation efforts will be able to keep up with the exponential growth of citizen video from around the world? In what ways can technology address this dilemma?

Protecting the Safety of Filmers & Filmed

The potential of citizen witnesses to expose human rights abuse has a flip side, and that is its potential to endanger activists and government critics. The video above of a protest in Iran reveals no identities, but that may be due to its blurry cell phone quality rather than caution on the part of the filmer.

The ObscuraCam phone app is one way filmers can intentionally blur faces, and the YouTube face blurring tool allows users to anonymize faces when they upload a video. But a greater education campaign is necessary to teach filmers and the video hosting sites, advocates, and news media involved in distributing their footage of the risks inherent with shooting video and the tools available to minimize them.

Empowering Citizen Videos with a Stamp of Authenticity 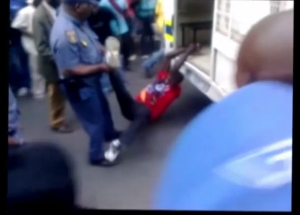 Citizen video documented a man dragged by a South African police van, before he died in jail of head injuries.

For citizen witnesses to shine a light on issues like sectarian violence in Burma, the use of phosphorus weapons in Syria, or police brutality in South Africa, they must convince viewers that what they are seeing is true. The ability to fake a video through animation or staging, or to re-upload old footage to represent a new situation gives us reason to watch YouTube with a healthy dose of skepticism. But this skepticism becomes dangerous if it means that news outlets or investigators have no way of trusting the veracity of a video, and thus refrain from broadcasting it, reporting on it, or submitting it as evidence in a criminal trial.

The verification strategy of Storyful, which uses a combination of social media, satellite imagery, and bootstrap reporting to corroborate citizen videos, is one way of addressing this challenge. Another is InformaCam, a mobile app in development by WITNESS and the Guardian Project that securely embeds metadata from mobile phone technology onto images and videos to imprint information such as where and when the files were recorded.

Generations past learned of the world through novelists, filmmakers, and newscasters. Institutional gatekeepers determined what stories to expose, and whose voices to amplify. Today, there are fewer gates filtering the voices. It is a great moment of challenge and opportunity to all of us eager to listen.

This article was written by Madeleine Bair and originally appeared on the WITNESS Blog.