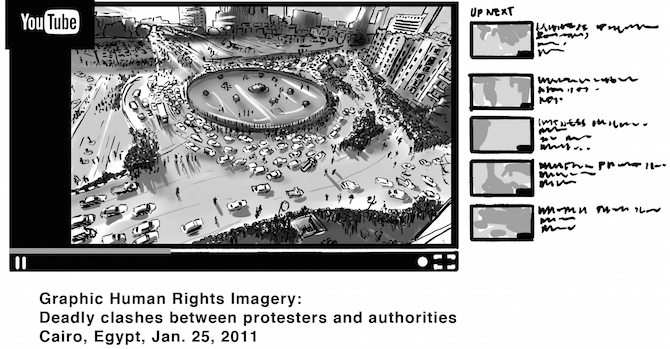 Editor’s Note: This is part of a series on WITNESS’s Ethical Guidelines for Using Eyewitness Videos in Human Rights Documentation and Advocacy. Check back each Wednesday through December 2015 for a new post on ethics and eyewitness video, or click here for previous entries.

Imagine you are a reporter, and a contact shares a video uploaded to Facebook documenting a violent police encounter. You have corroborated the video’s authenticity and plan to share it as a part of your reporting of the incident, as it contradicts the police report. The person behind the Facebook account has not responded to your message by your deadline. In your online report, do you:

Our last Ethical Wednesdays post focused on why and how to provide your audience with information about the source of eyewitness footage. Doing so allows the audience to understand the perspective, reliability, and potential bias of the source.

There are many situations, however, when identifying the individual who filmed or shared footage of abuse could put that person at risk–of online harassment, arrest, or other forms of retribution. Some filmers are conscious of those risks, while others are not until it’s too late–their name is publicly associated with the footage and there’s nothing they can do to change that.

For reporters, activists, and others whose work can amplify footage by eyewitnesses–and potentially amplify attention to eyewitnesses themselves–it’s important to understand the various risks that eyewitnesses face, and take measures when working with them or using their footage to ensure that your work does not unintentionally endanger eyewitnesses. (This post borrows from WITNESS’s Ethical Guidelines for Using Eyewitness Videos in Human Rights Reporting and Advocacy. See the full resource for more comprehensive guidance.)

Eyewitnesses in risky situations: In conflict situations or breaking news events, there may be eyewitnesses at the scene who take footage and share it on social media. If you are in contact with such filmers, prioritize their safety over a desire for footage they could gather.

Anonymous Filmers: There are particular occasions when the filmer and/or uploader of a video will want to remain anonymous due to security concerns. In places where journalists and activists work under grave risks, citizen media outlets often distribute videos taken by a network of filmers, whose individual identities remain anonymous. In a different scenario, a whistleblower may leak footage showing crimes committed by colleagues, and the uploader’s identity is intentionally kept private to prevent retribution.

Eyewitnesses unaware of their risk: Many eyewitnesses to abuse share footage on social media before thinking through the potential impact–on them and on those in the video. The Eyewitness Media Hub has documented several cases in which witnesses to breaking news shared their footage to social media as an instinct, and by the time they thought better of it, the video had already gone viral, along with their name.

If you are dealing with footage in which the filmer or distributor could be at risk for exposing abuse and has taken steps to remain anonymous, make sure to protect the source’s anonymity. You may want to consider doing so even if the filmer is not anonymous but may not be aware of the potential risks they face. Does the footage contain metadata—technical or descriptive information embedded in the video file—that could identify the source, or his or her location? Does the platform the video is hosted on reveal identifying information about the source, and if so, is the source aware of that? If you learn the source’s identity in researching the video, assess the risk to the filmer if that identity is publicly revealed. If you are in contact with the filmer, consider encrypting your emails and chats. (For more tips and tools for secure online communication, see the Electronic Frontier Foundation’s Surveillance Self-Defense website.)

The Online News Association (ONA) and the Eyewitness Media Hub are two organizations that have developed guidance and best practices for using eyewitness media in reporting, including considerations to take when using media from at-risk sources.

The ONA’s Build Your Own Ethics Code includes the following tips for considering the well-being of citizen journalists:

In 2014, the Tow Center for Digital Journalism published a major report on the use of user-generated content by broadcast news outlets around the world. Researchers found that, for the most part, news outlets must do a better job seeking permission from citizen journalists to use their footage. But in some regions, contacting citizen journalists to seek their permission could actually put them at greater risk. The report states:

There was certainly an understanding… that, when working with uploaders from certain countries, not seeking permission is the right thing to do. One BBC journalist working on a photo gallery from Iran told us, “As someone from the BBC it really raises a person’s profile if they’ve posted the image, by me saying, ‘Hello, can I use it? I’m from the BBC.’ So in that instance the Persian service advised that it’s better to just use it.

Risk Factors Unique to Each Situation

The risk varies for each individual and environment, so it is important to consider the risk factors at play in the community where the video is shot. In the context of the hypothetical scenario that began this post, several cases from the U.S. and elsewhere indicate the potential harm or danger that can face those who document police abuse. Ramsey Orta, who recorded the fatal chokehold death of Eric Garner in Staten Island in 2014, has spoken out about legal troubles he sees as retribution for publicizing the footage. He and several others who have documented and shared videos of police abuse in the U.S. have later expressed regret due to the media and legal attention that followed.

In Brazil, where extrajudicial killings number in the thousands each year and accountability is rare, witnesses fear not only attention but violent retribution. In Rio de Janeiro this fall, a favela resident filmed the aftermath of a fatal police shooting of a 17-year-old. In the video, you can see officers fire a gun and plant it on the corpse of the victim. While the video brought front-page coverage to the case, it also put the source in grave danger. While we do not see the filmer in the footage, the individual could be identified by voice as well as the angle of the recording. In this version of the video, the news outlet O Dia used an audio filter as one measure to protect the source’s identity. Reports have since surfaced that the filmer had to leave the community due to the threat of violence. (For tips for eyewitness on what to do after filming police abuse to protect your safety, click here.)

Police abuse is just one example of the potential risks that citizen journalists can face. When you use or share eyewitness videos, think through the individuals behind the camera to ensure that amplifying their footage does not unintentionally put them at risk.

For more guidance on using eyewitness videos safely and ethically to report on human rights abuse, see WITNESS’s Ethical Guidelines for Using Eyewitness Videos in Human Rights Reporting and Advocacy. Click here to see more from WITNESS blog series on ethics and eyewitness videos, and share us your own methods and challenges in using eyewitness video by reaching out on Twitter or sending an email to feedback [at] witness [dot] org.