Published June, 2019 by WITNESS in ICE

This post is part of the WITNESS Media Lab’s series,“Eyes On ICE: Documenting Abuses Against Immigrant Communities.” The following is a case study for the consideration of immigration attorneys, advocates, and community members nationwide thinking through the creative use of video in defending individuals against deportation. The case at hand was filed in California and relies on Ninth Circuit case law; however, video may be used strategically as powerful evidence to corroborate the experience of a person who has been detained no matter your location. Read Part 1 of this case study which looks at how video was used in public advocacy campaigns around Juan’s case.

Case at a Glance:

One day at a South Los Angeles mechanic shop in September 2017, Juan Hernandez Cuevas unexpectedly found himself approached by six people who burst into his workplace, some bearing semi-automatic weapons.

Within minutes, everyone was asked to freeze and put their hands up. Instead of arresting only the shop owner for whom they had a warrant, the agents also arrested several mechanics. With no warrant, no probable cause, and no information about him, the officers placed handcuffs on and proceeded to arrest Juan solely on the basis of his appearance and his presence at work that day.

Wearing vests marked “POLICE,” and never identifying themselves, Juan was not aware these agents were in fact with Immigration and Customs Enforcement (ICE). It was not until the agents took Juan to an immigration processing center that he was even informed that ICE had arrested him. He remained at a detention center for nearly five weeks, while his wife and daughter went without his financial support.

He was released only after a judge granted a bond of $5,000 which his family and advocates at The National Day Laborer Organizing Network(NDLON) helped fundraise for. He was issued a Notice to Appear (NTA) for his removal (deportation) proceedings, and the American Civil Liberties Union (ACLU) of Southern California and their co-counsel successfully represented him in a motion to terminate. The motion argued that his arrest “violated governing regulations, statutes and the Fourth Amendment to the U.S. Constitution” that protects against unreasonable searches and seizures. To bolster his arguments in support of this motion, Juan was able to leverage as evidence surveillance video captured the day of the raid (see video).

A Notice to Appear is a document issued by various Department of Homeland Security agencies that instructs an individual to appear before an immigration judge. It is the first step in initiating a removal proceeding against them. The document also contains the factual and legal grounds for initiating the proceedings.

In Juan’s case, the mechanic shop’s security camera was filming on that September 2017 day and captured the entire raid. To build their case, Juan’s attorneys used excerpts of the surveillance footage as exhibits. This footage along with sworn declarations from Juan and an eyewitness were used to corroborate Juan’s account of how the raid unfolded.

In their motion to terminate filed in immigration court in Los Angeles, his attorneys argued that removal proceedings should be terminated because ICE’s arrest and detention of Juan was unlawful as it violated governing regulations, statutes and the U.S. Constitution’s Fourth Amendment against unreasonable searches and seizures. (See Juan’s motion to terminate).

A motion to terminate asks an immigration court to terminate or conclude a case on the grounds that relief is granted or the government has violated certain regulations, policies or procedures.

According to Eva Bitran, one of Juan’s lawyers, “agents detained Juan based on racial profiling. Though the video is without sound, it’s apparent there was no time for any other determination.”

His lawyers argued that because the removal proceedings against Juan resulted from ICE’s violation of governing statutes, see 8 C.F.R. 287.8(b)–(c), the court should grant his motion to terminate.

The legal team in L.A. laid out the following 9th Circuit standard for termination in their motion. (See changes made to the standard in 2018, p.5 [1] )

Source: standards for termination in Juan Hernandez Cuevas motion to terminate from 2017; the standard has since changed due to Sanchez v. Sessions (9th Cir. 2018)

Critically, Juan’s lawyers argued that a violation of just one of the below regulatory provisions would be adequate grounds for termination because the whole regulatory scheme has been held to incorporate the Fourth Amendment. (See Juan’s motion to terminate, p.13).

What Violations did the Surveillance Video Show?

What happens during a civilian’s encounter with ICE agents can be a story of he said-she said. A credible piece of corroborating evidence can crucially impact the direction of a case.

His attorneys argued among other points that the video showed: 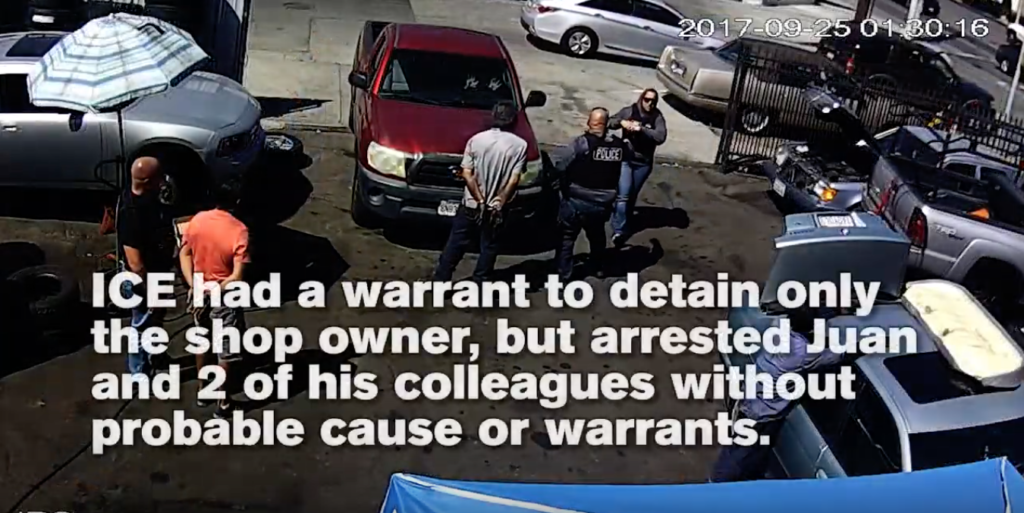 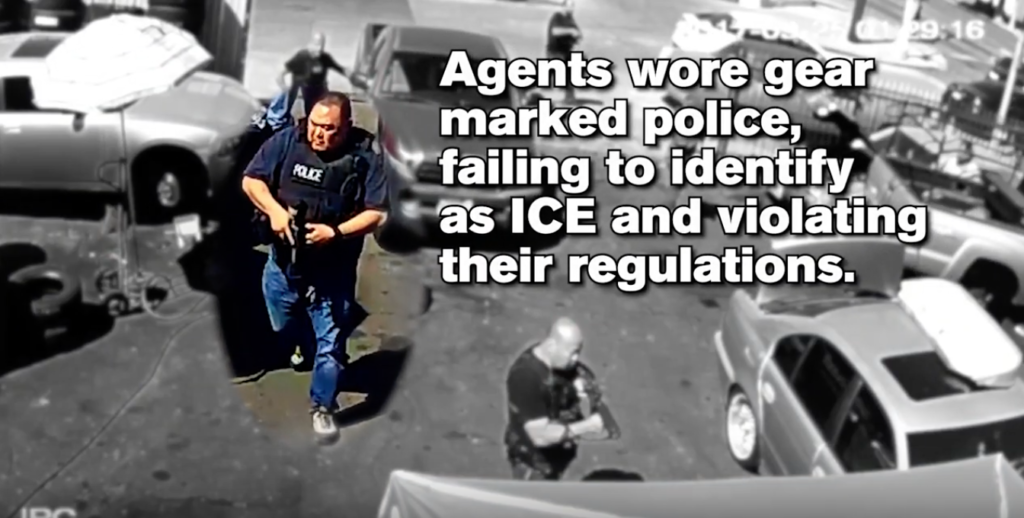 After the filing of Juan’s motion to terminate, Immigration officials agreed to voluntarily drop the deportation proceedings against him; and the Immigration Judge in L.A. approved that action before any hearing was necessary.

As there was no hearing in this case and no reasoned judicial opinion, it is unclear which specific facts shown in the surveillance video led The Department of Homeland Security(DHS) to withdraw the charge against Juan. If it would have been Juan’s words alone supporting his case, however, DHS lawyers may never have terminated the removal proceedings against him, according to his attorney.

What is clear in this case is that video backed up Juan’s own version of the facts contained in his official declaration, leading to the dropping of the deportation proceedings. While client declarations should be enough in the courtroom, often they are not. Video can corroborate the accounts of clients and community members about how an apprehension or a raid unfolded.

Obtaining and Preparing the Video Files for an Immigration Proceeding

Nearly three weeks after the workplace raid, a community member under the direction of Juan’s attorneys was directed to the mechanic shop to retrieve the surveillance video. The shop’s surveillance system automatically deleted video every few days, but the shopkeeper’s son had copied to his laptop video excerpts showing the relevant events of that afternoon, including some footage before and after the raid.

Essential to Juan’s immigration case, the community member who retrieved the footage, signed a declaration under oath stating that he copied the footage from the shopkeeper’s son’s laptop onto a USB drive; and that he then copied the same files onto his own computer.

The community member also attested to the fact that he only changed the format of the footage from .dav format (which the surveillance equipment creates) to .mp4 format to make the video easier to play before sharing the files with Juan’s legal team. He stated in a written declaration, “aside from this conversion, I did nothing to the files. I have not edited, modified, altered, or manipulated the footage in any way.”

Chain of Custody and File Conversions of Video in Juan’s case:

Chain of Custody refers to the chronological succession of ownership or custody of the evidence. Each possession should be carefully documented as the footage makes its way from the street or workplace or home where it was filmed to lawyers, and then to the courtroom. A proven chain of custody helps to establish that there was no opportunity for corruption or manipulation from unknown sources.

If the footage turns out to be useful for your case, having a thorough record of who has had possession of the evidence can affect the weight that evidence is given in your case. Read more about Chain of Custody in our Video as Evidence Field Guide: Basic Practices.

The legal team argued, “the video evidence is relevant because it captures the Immigration and Customs Enforcement raid on Juan’s workplace that resulted in his arrest and placement in removal proceedings[…] these videos, which show how ICE conducted the raid, including ICE’s interactions with and arrest of Juan, corroborate key portions of Juan’s account and are probative evidence of the raid and ICE’s arrest of Juan.” (See Motion to Submit Video Evidence).

The following is an excerpt of the motion to terminate removal proceedings against Juan. As noted in the motion, the pinpoint citations for Exhibits 3 and 4 are timestamps that indicate the minutes and seconds elapsed on the video files submitted as evidence: 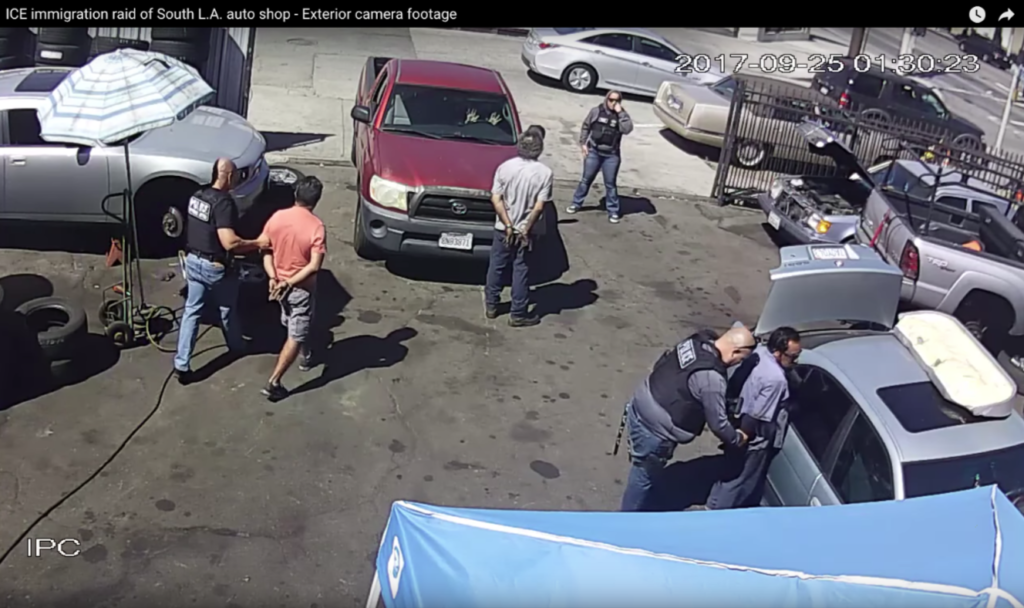 After the filing of Juan’s motion to terminate, Immigration officials agreed to voluntarily drop the deportation proceedings against him; and the Immigration Judge in L.A. approved that action before any hearing was necessary. Video was not only used as evidence in Juan’s case, it also helped bolster advocacy efforts. For instance, by editing the surveillance footage to clearly show the abuses and adding footage of Juan and his family, the ACLU was able to tell a more complete and human story that advocated for him outside of the courtroom as well.

For more information on how Juan’s advocates used video to garner community pressure and fight for his rights, see Part One of Juan’s Case Study.

Surveillance video coupled with an eyewitness’s declaration corroborated Juan’s version of the facts that day. Ultimately, DHS withdrew its charges and moved to dismiss the proceedings without prejudice against Juan on the grounds that the NTA was improvidently issued, thereby acknowledging that Juan should never have been detained and placed into removal proceedings to begin with, and the proceedings to remove him should be terminated.

While there is no reasoned judicial opinion in this case, once DHS withdrew the charges, the judge dismissed the case.

We may never know if Juan’s case would have been successful without the video footage available; however, his attorney suggests that it is very unlikely that DHS would have otherwise voluntarily dismissed the charges against him.

“You want to be able to marshal as much as you can in support of your client – and in this case in particular, I think surveillance video was critical to getting the result that we did.” – Eva Bitran, lawyer for Juan.

A short note on important challenges of pursuing motions to terminate as a strategy: an individual with strong eligibility for relief (such as a good candidate for cancellation of removal or asylum) may want to consider whether pursuing a motion to terminate is in their best interest, as well as the possibility of an NTA being re-issued. This must be discussed between client and attorney. For a more thorough review of various challenges and strategies relating to NTAs, review the latest practice advisories.

These takeaway points are intended for various actors, generally attorneys and advocates, in the process of obtaining video footage and converting it into supporting evidence in a proceeding.

II. PREPARING VIDEO FOR A PROCEEDING

“[A] petitioner is entitled to termination of their proceedings without prejudice as long as the following requirements are satisfied: (1) the agency violated a regulation; (2) the regulation was promulgated for the benefit of petitioners; and (3) the violation was egregious, meaning that it involved conscience-shocking conduct, deprived the petitioner of fundamental rights, or prejudiced the petitioner.” Sanchez v. Sessions, 904 F.3d 643, 655 (9th Cir. 2018)

As Sanchez v. Sessions was filed in the 9th Circuit, attorneys practicing in other circuits should verify the most current practice advisories for the latest changes to the standards in their own circuits.

We would like thank Eva Bitran of the ACLU as well as Yasmine Chahkar Farhang, for their interviews and reviews of our research. Deep gratitude for your input and commitment to this work!

The information contained here is for educational purposes; it does not and is not intended to constitute legal advice.