Published March, 2018 by palika in ICE

This case study is part of the WITNESS Media Lab’s series, “Eyes On ICE: Documenting Abuses Against Immigrant Communities .” It is for the consideration of directly impacted communities, advocates, and immigrant rights organizers nationwide thinking through the creative use of video in advocating for immigrant communities and against deportation. Read Part 2 of this case study which is focused on the evidentiary use of video in Juan’s case.

Juan Hernandez Cuevas lives in L.A. with his wife, Crystal, and young daughter, Sofia, and is their family’s sole provider.

On September 25, 2017, Juan was at his job as a mechanic at View Park Automotive in Los Angeles, CA, where he’s worked for the past seven years. Suddenly, six Immigration and Customs Enforcement (ICE) agents stormed the shop with semi automatic weapons drawn. Despite only having a deportation order for the shop’s owner, the agents handcuffed everyone who worked there- including Juan. Agents arrested him with no probable cause, warrant, previous contact with or information about him. He was arrested based solely on the color of his skin, and detained for five weeks before his family and community were able to fundraise for his bail.

Following his release from detention, Juan’s lawyers were able to secure a dismissal of deportation proceedings after months of advocating and waiting. As stated in their motion, with no probable cause or warrant, ICE agents knew nothing about Juan before arresting him “other than that he appeared to work at the garage and looked Latino.”

The entire incident was captured from the shop’s interior and exterior surveillance cameras. Juan’s lawyers at the ACLU of Southern California, the Law Offices of Stacy Tolchin, and organizers at The National Day Laborer Organizing Network (NDLON), are using the footage to corroborate witness testimony, help expose how ICE’s actions violated their own regulations, and advocate for Juan and his family. According to the ACLU’s court filing, because ICE had neither a warrant or probable cause for arrest, the court should terminate deportation proceedings against him.

“So often these things happen and nothing is ever captured on video, and that to me is one of the toughest things about this kind of practice,” Eva Bitran, Juan’s lawyer, said. “You don’t always have this kind of corroborating evidence that you wish you had. We know ICE carries out similar unlawful arrests frequently and across the country. It shouldn’t take a video to hold them accountable, but we’re glad this one exposes their tactics.”

Witnesses said ICE agents failed to identify themselves as immigration agents even though their regulations require them to as soon as it’s “practical and safe to do so” (see regulation:8 CFR 287.8(c)(2)(iii)). And as evidenced by the surveillance footage showing Juan and his colleagues calm and cooperating, ICE officers had no reason to feel unsafe. The question of their identities was made even more confusing by agents wearing vests that read “POLICE,” as can be seen in the surveillance footage. According to the court filing, it was only during the car ride to the immigration processing center that Juan finally learned who the agents were.

The footage helps corroborate Juan and other witness testimony of how the raid occurred, and the way in which ICE agents approached people who they were not previously targeting with no explanation of who they were and why they were making arrests. In the exterior camera footage, can see an ICE agent order Juan to put his hands up and stand against a car, search and then handcuff him with no conversation, despite not having any reason to believe Juan was not a U.S. citizen.

“ICE’s arrest-first-ask-questions-later approach to enforcement is not only unlawful, it has real, painful consequences for communities and families,” Eva said in an article the ACLU published about the case. “Agents detained Juan based on racial profiling. Though the video is without sound, it’s apparent there was no time for any other determination.”

The Value of Video

Perhaps the most shocking issue the surveillance video exposes is how six agents stormed a place of business in the middle of the day with semi automatic weapons drawn despite only having an order to detain one person, who wasn’t a violent criminal. 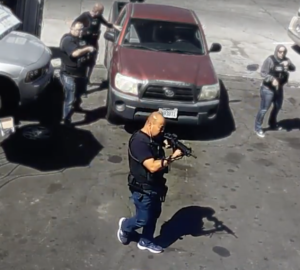 “I think a lot of people don’t always have fully present that immigration violations are civil, they are not criminal,” Eva said. “It’s an administrative proceeding, something like failure to pay your taxes, for example. It’s just shocking to me to see this level of force being used to enforce a civil administrative violation because it really makes the people in the video look like hardened experienced organized criminals. It’s quite shocking to see semi automatic rifles being used in broad daylight without any reason to believe that there’s this huge risk to officer safety.”

In order to advocate for Juan and inform the public of the egregious ways ICE operates, Eva and her team have been employing creative strategies using the surveillance footage. Their multimedia producer edited a short video that highlights the different abuses visible in the footage, rendering it easier to digest for a wider and non-legal audience. They also included interview footage of Juan, and footage WITNESS filmed of Juan, his wife, and daughter reuniting at the immigration detention center after his bail was paid. By editing the surveillance footage to clearly show the abuses and adding footage of Juan and his family, the ACLU is able to tell a more complete and human story that advocates for Juan outside of the courtroom as well. Juan’s family and advocates and The National Day Laborer Organizing Network (NDLON) were also able to use the footage/photographs for a  fundraiser to pay for his bond in just three days.

“The thing that I’m always trying to get out of video is how do you make people not feel afraid anymore, David Abud, Juan’s advocate at NDLON, said. “Having the story that tells that through rallying together and community support you don’t have to be afraid of the state and the kind of violence it’s trying to inflict on people. We’re hoping that it will paint a fuller narrative of what’s going on that it will show the community that you can fight these kind of things and you can win.”

Read Part 2 of Juan’s Case Study to learn how surveillance video was used as evidence by his lawyers.

Surveillance video can be a great alternative to eyewitness video, which isn’t always safe or easy to capture and share in the moment – especially in immigration cases where keeping someone’s identity and immigration status secure can be crucial. As with Juan’s case, it can be helpful to look for surveillance cameras in the area after an incident with ICE. Eva was able to secure the footage from the mechanic shop by working with a community member who obtained footage from the shopkeeper’s son.

As video begins to be utilized more in immigration work, it’s important to share best practices and strategies in an effort to strengthen our resistance. In addition to looking out for surveillance cameras:

Video is One Piece of the Puzzle 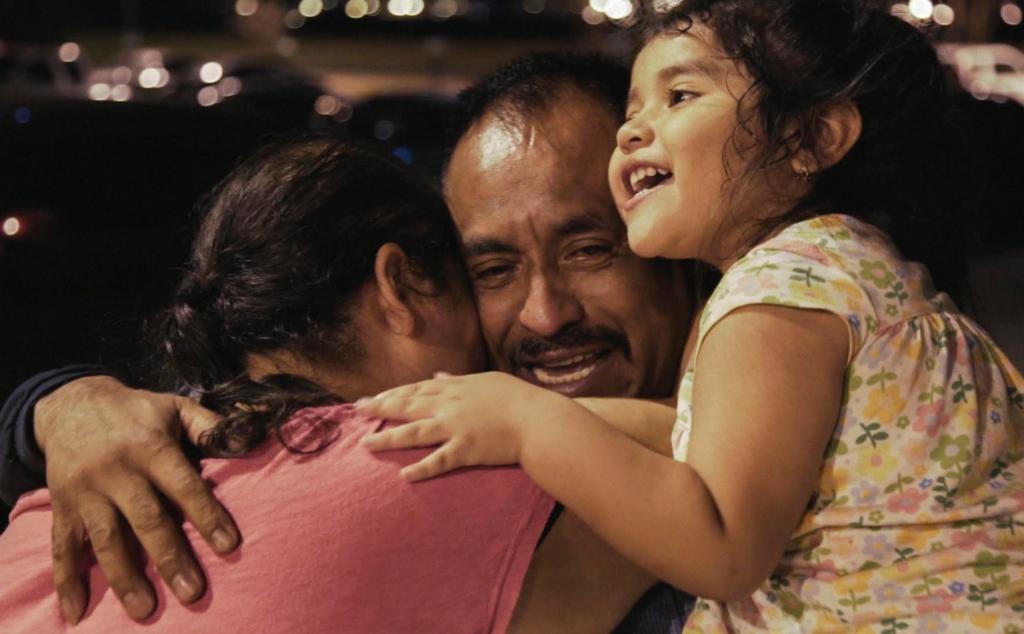 Juan, Crystal and Sofia reunite outside the detention center

It’s important to note that video alone cannot secure justice. Rather, video is one tool that advocates, lawyers and communities can utilize to better fight for immigrant rights. Juan’s family, advocates at NDLON, community, and lawyer all worked together to bring him home by using press, applying community pressure, and a strong/creative legal argument. In addition to helping to fundraise to pay his bond, and connect him with legal resources, advocates at NDLON also trained his family members to be able to speak publicly and to the press about Juan’s arrest in an effort to shed light on what happened as well as the systemic injustice.

And although Juan is now at home with Crystal and Sofia, it’s important to remember that there are lasting and devastating implications to being in a detention center. Detainees, their families and communities often experience trauma, mental and other health related issues, they might fall behind on rent, lose their jobs, etc. This only further marginalizes working class and people of color.

Unfortunately, Juan’s story is similar to cases we’re seeing across the country as ICE arrest rates of undocumented and undocumented immigrants without criminal records skyrocket. In fact, Juan was arrested during a week of similar ICE enforcement actions across the country that targeted hundreds of immigrants in sanctuary cities. WITNESS’ Eyes on ICE series will continue to explore the role video can have in exposing these abuses and advocating for immigrant communities.

For more guidance on how to use video in immigration work safely, ethically and effectively, visit:https://lab.witness.org/projects/eyes-on-ice/