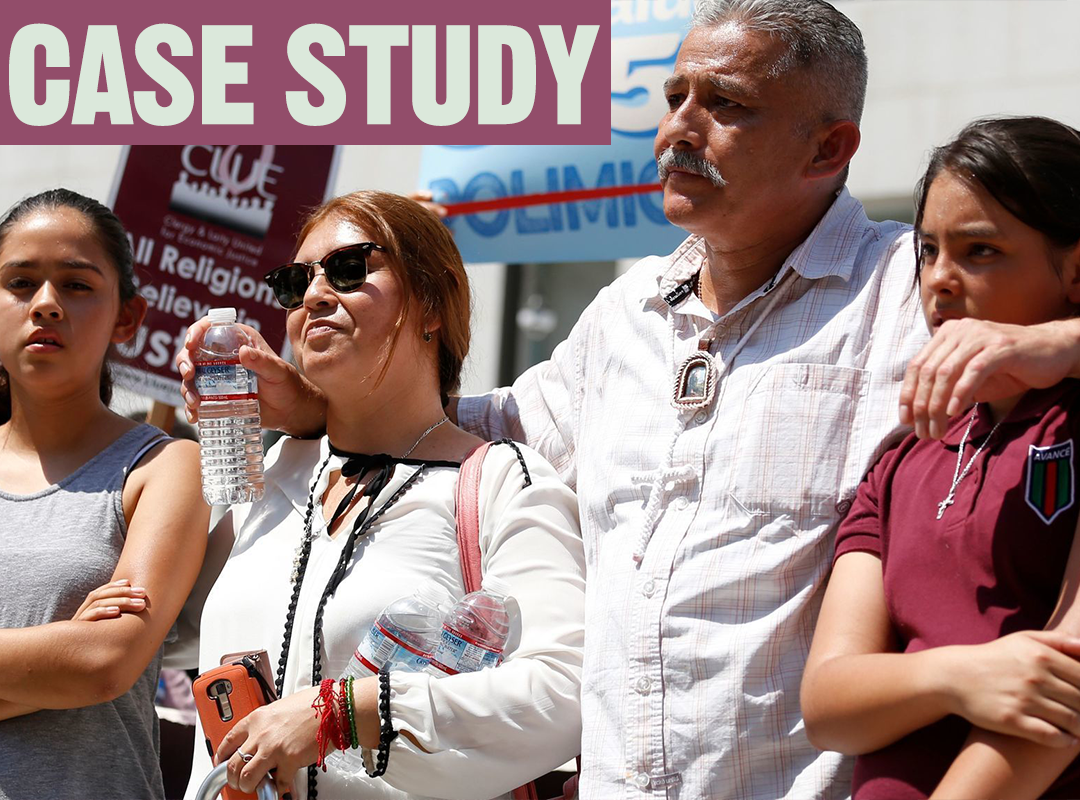 This post is part of the WITNESS Media Lab’s series, “Eyes On ICE: Documenting Immigration Abuses.” The series examines the role of video in exposing immigration abuses, holding Immigration and Customs officials accountable, and advocating for immigrant communities. Follow along each month as we create & share resources, case studies, interviews with activists and organizers, videos and more in hopes of strengthening communities in resistance. #nobannowall #nodeportations #heretostay

Romulo Avelica-Gonzalez and his wife had just dropped off their youngest daughter at school in the Highland park neighborhood of Los Angeles. They were en route to drop off another of their four daughters when Romulo saw flashing lights from a black car that had been following them. Government officials with only the word “police” emblazoned in large yellow letters on their backs emerged from the unmarked car, demanding that Romulo get out immediately. Despite not identifying as such, the men were Immigrations and Customs Enforcement (ICE). They arrested Romulo while his wife and 13-year old daughter, Fatima, watched in tears from the car. Amidst her sobs, Fatima pulled out her cell phone and pressed record.

ICE agents said they arrested Romulo, who has lived in the U.S. for over 25 years, based on two decade-old misdemeanor convictions that have since been vacated, and an order for removal from 2008 as a result of the misdemeanor convictions. His lawyers were able to temporarily combat the order with an emergency stay.

Romulo’s case represents how families are being torn apart by new policies targeting undocumented immigrants. Under Trump’s new widened deportation machine, every one of the estimated 11 million undocumented immigrants in the U.S. is a priority, misdemeanor conviction or not, even while driving their daughters to school.

The Power of Video

With help from a journalist, Romulo’s family publicly released Fatima’s footage of her father’s arrest. The video went viral, garnering national support for Romulo’s case as his story became emblematic of the effects of the new administration’s racist and inhumane immigration policies.

“We just wouldn’t have had the kind of success that we had with Romulo’s campaign had it not been for that video,” David Abud, regional organizer at The National Day Laborer Organizing Network (NDLON) and advocate for Romulo’s case, said. “I think that was the number one most important aspect of that campaign was that we had this video that was really shocking to a lot of people. I think a lot of people didn’t know that’s the kind of devastation that deportation and family separation can cause. Having people really feel that when they saw that video was something that was incredibly powerful and more powerful than any advocacy that we could have done.”

Fatima’s video helps expose how ICE agents often portray themselves as officers from local police departments to ensnare or fool people into revealing information, or even into giving ICE consent to enter their homes. Advocates say the use of tactics like these are especially egregious in heavily immigrant cities like Los Angeles where police and elected officials have tried for decades to distinguish local cops from federal immigration agents. In just the first six months of 2017, reports of domestic violence have declined among immigrant communities in some of California’s largest cities as undocumented immigrants avoid courts and local police in fear of deportation.

“One of the other things that the video showed was that ICE was wearing police jackets without any identifying markers in completely unmarked cars,” David said. “They didn’t identify themselves as ICE when they first arrested Romulo. [It was] concerning to see that in people’s neighborhoods as [they’re] dropping their kids off could get pulled over by unmarked cars and agents without any identifying information and without advising them of why they’re being arrested and what they’re rights are.”

The video also ignited debate around whether ICE violated their own policies by arresting Romulo just five blocks from his daughter’s school. By ICE’s own directive, school’s are considered sensitive locations which should “generally be avoided, and require either prior approval from an appropriate supervisory official or exigent circumstances necessitating immediate action.” Neither approval nor exigent circumstances were present in Romulo’s case.

Media Attention – The Good and the Bad

While the video did help to expose abuse and usher in support for Romulo and his family, the high profile case also added to an escalating climate of fear among immigrants in the U.S.

“I think that’s one of the struggles with this case. It’s gotten an extraordinary amount of attention,” Emi MacLean, an immigration attorney for NDLON told Amy Goodman on Democracy Now. “In some ways, that can have the kind of deterrent effect that we know that Donald Trump wants. We know that he wants, as we heard in some of the previous stories, to make people afraid of coming to the United States, to make this country unwelcoming of immigrants. And a case like this getting the kind of attention that it’s got can have that effect, unless we use this case to fight back, unless we refuse to be desensitized to the kind of horror and trauma that we see in the video that Fatima shot, unless we use that as an opportunity to mobilize and to fight back and to say,

The media attention also thrust Romulo’s family – including his young daughters – into the spotlight. Working with NDLON, a trusted advocacy organization, helped the family negotiate interview requests before they became overwhelming or potentially retraumatizing. While the spotlight can serve as an important platform, providing more intentional training to immigrant families can help them to be better prepared.

Video can be a powerful tool for justice, but it’s not always safe to share videos of ICE and people being detained on social media. Sharing footage online could potentially put ICE’s target and their families at further risk, or expose other undocumented bystanders in the frame – making them vulnerable to retaliation.

In another case in Los Angeles, 22-year-old immigration activist and college student, Claudia Rueda, was arrested by Customs and Border Patrol while moving her family’s car. Claudia, who is undocumented and came to the U.S. when she was 4-years old, was allegedly detained as part of a probe into a “cross-border narcotics smuggling operation,” and later arrested by ICE. Community members and friends of Claudia, however, believe she was targeted because of her visibility in the media and on social media from protests she led, advocating for her mother. Claudia’s mother was detained as part of a multi-agency drug raid at her home that resulted in the arrest of her husband. Despite being told she would not be detained if she cooperated, Claudia’s mother was still arrested by Customs and Border Patrol agents for her immigration status. Claudia led a series of protests calling attention to her mother’s unjust detention and collusion between local law enforcement and ICE. Though Claudia and her mom have since been released, she still faces possible deportation, and has been working to apply for DACA.

“You have to think about who are the people who are leading these types of campaigns, what their immigration status is and how at risk they are,” David said. “You have to be really careful when you’re doing immigration work and releasing videos because some of the things that you can say that usually would be really simple things that you wouldn’t really think about can be very dangerous and have deep implications for people. So you have to always be really careful about that and be consulting with attorneys to make sure the things that you’re saying aren’t affecting them.”

For those who have filmed or received a video of an ICE related incident, before making the decision to publicly release footage, pause and consider the potential benefits and risks to sharing the video. Are there any identities that you need to protect? Do you want your name associated with the footage? Are you prepared for the potential media attention? When will you release the video? How will you use video create the biggest impact?

Those are the types of questions David and his colleagues are asking themselves as they continue to use video as a tool for their immigration work. While Romulo’s case developed at lightning speed and both his family and NDLON had to roll with the punches, they are now working to incorporate best practices and lessons learned from the case into video advocacy efforts moving forward – especially around timing (when to share a video and with whom) and impact (tying videos to specific policy demands).

Regardless of whether or not a video is linked to a larger campaign, it can still serve as valuable documentation of the pain and challenges a community is facing.

After six months of Romulo’s family, community, and lawyers tirelessly advocating, organizing, rallying and speaking to media, Romulo was finally released from immigration detention. Although he’s been released and is now at home with his family, Romulo’s story is nowhere near finished, and there is so much more work to be done before he is guaranteed a stay with his family in the U.S. So while it’s necessary to remain hopeful and celebrate victories along the way, it’s important to remember that the struggle continues.

“Something I want to be really careful about is that sometimes these kinds of narratives can make people think that the system worked,” David said. [People think] that an innocent person was put in this position and then we were able to get them out and the system worked and now they’re going to be fine, which is not the case. There are lasting implications of people being in deportation proceedings. People lose housing, people lose their children, people lose their jobs, people lose their livelihoods. There are really deep impacts that puts people who are already impoverished, people who are already poor and working class, deeper into that hole of poverty.”

For more on how to film ICE safely, ethically and effectively, check out our existing resources (available in multiple languages):