How Could States’ Wiretapping Laws Affect Your Right to Film Law Enforcement?

This post is part of WITNESS’ global Right to Record initiative. Visit the Right to Record project page to learn about our work and how human rights activists around the world are exercising and defending their right to record.

By Dia Kayyali and Jackie Zammuto. Legal research and support for this article was provided by Jake Reichman.

Recently there has been a drastic increase in the use of video, primarily by cellphone, to record police activity. Cell phone video has not only helped expose unlawful use of force and juxtaposed false reports made by officers, but it has also served as a useful tool for civilians monitoring police behavior and in some cases it’s even helped de-escalate tense situations. However, in several cases police have interfered with people recording video of arrests and traffic stops. This interference has ranged from yelling, taking the filmer’s phone, and even arresting people for recording. 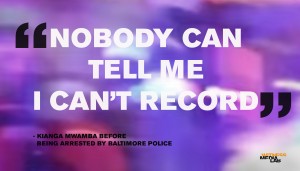 Read about the case of Kianga Mwamba who was arrested for filming the police in Baltimore.

The police often use a variety of different rationales to detain or arrest people who are filming police actions. In many cases, police claim that just filming counts as “interfering” with their duties and use this as justification for an arrest. “Interfering” is not clearly defined. Often officers will claim that someone did not back up after being ordered to.

Another tactic sometimes used by law enforcement to target people filming or recording police activity are “wiretapping” laws. These laws are state laws that govern when a private conversation can be audio recorded. They were intended to protect people’s privacy — but in some cases they have been used to challenge the right to record law enforcement.  States have either a “one-party consent” statute or a “two-party consent” statute:

Below is a map of the states that includes the wiretapping laws for each, so you know your rights in your state. Click on states with two-party consent laws to learn more about specific cases. Both Alaska and Hawaii (not pictured) have one-party consent laws.

When it comes to filming law enforcement, in most states it is legal to openly film the police in public without their consent to record audio. Federal courts have also weighed in on this issue, and according to the Digital Media Law Project, “A number of U.S. Courts of Appeals have held that, in such circumstances, the First Amendment protects the right to record audio and video regardless of whether the police/officials consent. This constitutional right would override any state or federal laws that would otherwise prohibit such recording.” 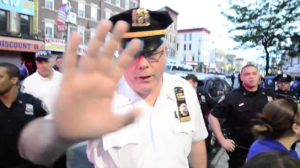 Visit our “Profiling the Police” project to see how activists in New York document the police interfering with their Right to Record.

But over the years there have been a handful of cases in all-party consent states where people have been arrested for recording audio without the officer’s consent. As discussed below not all circuit courts have ruled on this issue and some circuits have found that the 1st Amendment does not give everyone the right to record police.

For example, in 2010 in Maryland, Anthony Graber was pulled over while on his motorcycle and he secretly recorded his interaction with the police. Following the incident, Graber uploaded the video to Youtube and shortly afterwards police obtained and executed a warrant to search his home, camera and computers. He was then arrested for violating wiretapping laws that prohibit audio recording without consent and disclosing the recording to others. He was charged with four felonies and could have faced 16 years in prison if convicted. This case was later thrown out because the court determined the police had no reasonable expectation of privacy during a traffic stop. According to the Maryland wiretapping law, it is legal to film a police officer in places where there is no expectation of privacy. You can read the judge’s ruling in this case here.

AFFIRMING THE RIGHT TO RECORD

The right to record is determined by jurisprudence, meaning decisions made by judges, rather than legislation. However California (SB-411), Connecticut (SB-1109) and Colorado (HB 15-1290) have enacted further laws addressing filming the police. In 2015, California enacted into law SB-411 which codified that a civilian taking a photo or video of an officer in a public place cannot be detained or arrested for obstructing police duties. A recent Connecticut law allows people who are harassed by police for the act of filming officers to sue for damages in state court. This law is unique in that it allows a civilian to go directly to state court for damages, instead of the usual process of suing in federal court.  This law does include a restriction stipulating that if you actively interfere with police activity while filming, you will not be able to file a lawsuit. And unfortunately, whether or not you are “interfering” is determined by the police officer. It’s likely that in coming years Connecticut’s law will be the subject of lawsuits that will clarify how far police officers can push this provision.

Regardless of whether you’re in a one-party or all-party state, it’s important to keep in mind the privacy and dignity of the person being targeted by law enforcement. They may not want to be recorded or have the video shared publicly. When possible, make eye contact or communicate with the person being detained to let them know that you are there to observe and document the cops’ behavior. Always respect their wishes if they ask you to stop filming. Find tips on filming the police here.