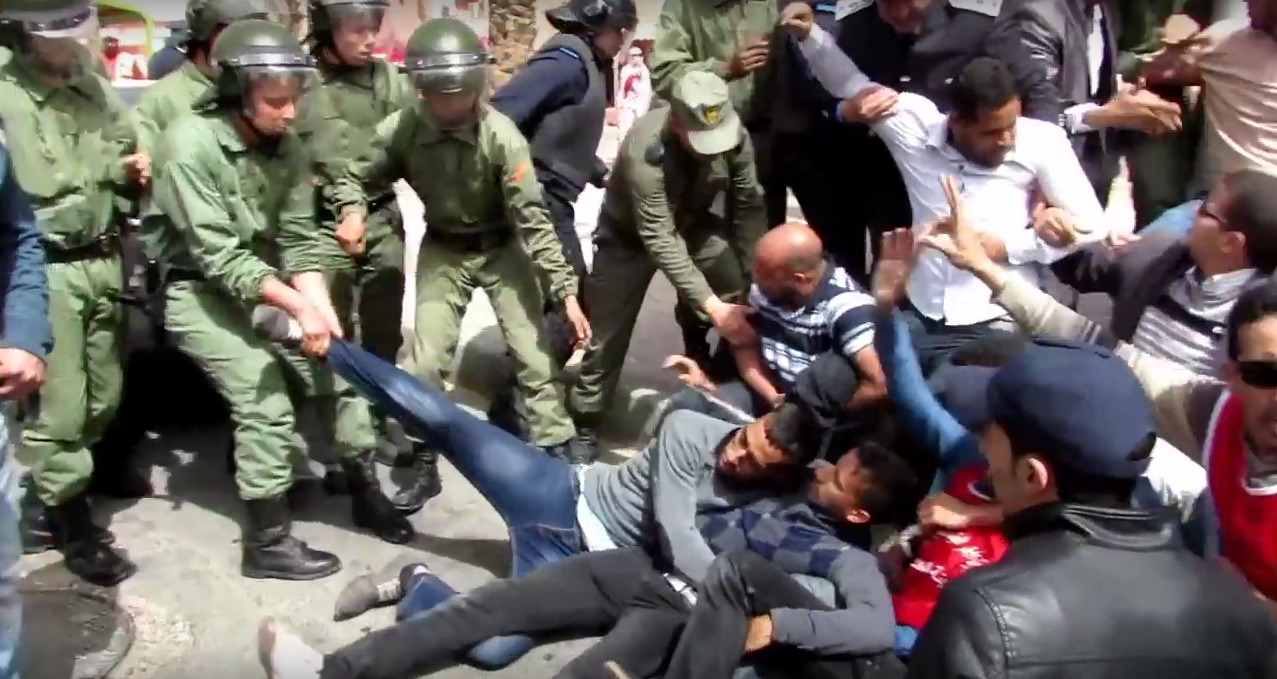 By Madeleine Bair and Maria Carrión

Last weekend, 26 people were reported injured in the capital city of Laayoune, Western Sahara, as police repressed a peaceful protest in support of hunger striking political prisoners and calling for a referendum on self-determination for the Morocco-occupied territory. One of the injured was media activist Salha Boutanguiza, a correspondent for the Sahrawi television RASDTV, whose nose was broken by plainclothes police.

The injuries are a common part of protests in Western Sahara, and protests have become a daily occurrence in this disputed territory, where Sahrawis have struggled for independence for 40 years. With a virtual ban on international media and human rights observers imposed by Moroccan authorities, the only way for the outside world to see these protests is from videos filmed by media activists and shared on YouTube, Facebook, or in chat groups. Because they are filmed surreptitiously and often by self-trained media activists, it can be difficult for a viewer unfamiliar with the context to understand what they are watching. Here’s a primer, based on what we have observed monitoring online video channels from Western Sahara since late 2015.

Why do they protest?

We have seen peaceful demonstrations unfold every week in the capital of Laayoune, as well as in other cities. Many are a part of a broad social movement focused on economic rights. Protesters say that good jobs are denied to Sahrawis, and that Sahrawis do not benefit from the exploitation of natural resources in their territory, such as phosphate extraction, fishing, and offshore oil exploration. Others call for the self-determination of Western Sahara, or for a referendum that would allow Sahrawis to vote on the option of becoming an independent state or remain under Moroccan rule–something promised in the UN-brokered ceasefire agreement signed 25 years ago, but that has yet to be carried out.

Most recently, Sahrawis have protested Morocco’s decision to order a significant part of the UN peacekeeping staff to leave the Western Sahara after UN Secretary General Ban Ki-moon called the situation in Western Sahara an “occupation”. The UN peacekeepers are part of a mission known as MINURSO established 25 years ago to oversee compliance with ceasefire conditions. Their expulsion by Morocco, referred to as “unprecedented” by the Secretary General’s office, has created the gravest crisis in Western Sahara in the past 25 years.

No matter its size or subject, nearly every Sahrawi protest we see on video is aggressively disrupted by Moroccan security forces. If they can, authorities will quash a protest before it can even get started. In the footage below, for example, it takes less than a minute for plainclothes officers to attack a demonstration of 5 women and 4 men on a street corner in Laayoune.

A similar scene plays out in this video, of a protest last December. Six women hold a banner with pictures of 15 young activists on the 10th anniversary of their disappearance. Several plainclothes officers approach, rip up the sign and appear to tell the women to scram. They are followed by a group of uniformed officers.

To carry out large protests, activists must plan strategically so that a mass of people can assemble before authorities are able to quickly break them up. The video below shows just such a demonstration. In the first minute, nearly 100 protesters seem to emerge out of nowhere to gather on a Laayoune street, before the plainclothes officer with the walkie-talkie can respond.

Here, security forces use a tactic we’ve seen in many large demonstrations. They respond in large numbers, line up facing the protest, and at once, rush towards the protesters to disperse them (in the video above, this comes at 10:00).

In many protests, activists use tactics of nonviolent resistance to stand up to security forces. In the protest documented below, young men sit down, while women stand behind them chanting. As officers approach, activists show them peace signs and link arms. The activists, from groups calling for better employment of Sahrawis, say, “human rights, see it well.” “No stone, no knife,” is another a common chant, affirming the activists’ commitment to nonviolence.

Officers attempt to extract demonstrators out of these protests individually, pulling at limbs and tossing activists to the ground.

The force used by Moroccan authorities to disperse demonstrations and attack activists is enough to result in injuries. At many protests, the arrival of security forces is followed by that of ambulances ready to take away the injured. In others, we can see officers forcibly shoving activists (from 2:20  in this video), or inflicting harm to peaceful demonstrators. Often, those attacks are left up to the plainclothes officers, some of whom are well-known among activists for their violent aggression. At last Saturday’s protest in Laayoune, this video captures a man in a light jacket kicking activist Salha Boutanguiza in the face.

Footage shared online provides an important but limited glimpse into protests in occupied Western Sahara. As one media activist told WITNESS, filmers must take caution to avoid notice from authorities. “If there is a camera filming everything that Morocco is doing, they will look first for the camera, before targeting others.” Most videos are filmed from afar, often from rooftops or balconies. Others appear to be filmed undercover from the street level, as we can see when, at the end of this video, officers appear to take notice and approach the filmer. Security forces themselves can be seen in videos filming protests for their own purposes.

Stay tuned here as we continue to monitor videos from Western Sahara. Share your thoughts, videos and resources with us on Twitter at @WITNESS_Lab.

Top image is a still from this video of a protest on March 2 in Laayoune.