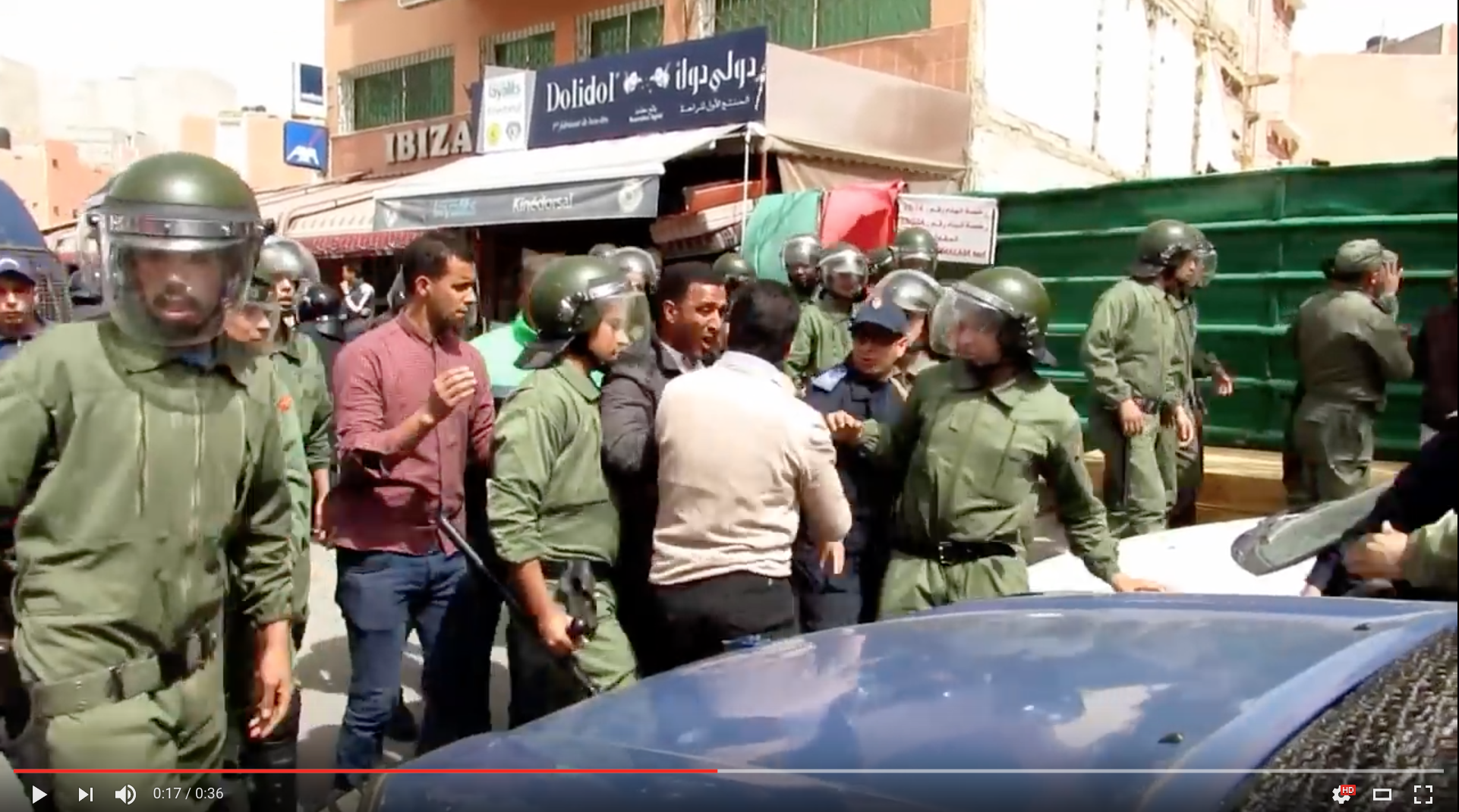 Verification is a key issue in investigating news and human rights issues through online video. We have seen countless videos shared with a false description in an attempt to dupe viewers, confuse the public, and cast a shadow of doubt over authentic citizen footage.

In curating videos from Western Sahara, false context is not so much of a challenge as lack of context. Many Sahrawi organizations that regularly upload online videos, such as Equipe Media and the Sahara Center for Media and Communication, include the location and date of the recording in the video’s YouTube title or description–details that can be corroborated through visual information and from other reports of the same event. However, other videos are shared without such details. For these cases, online research and video verification tools help us understand what it is we are watching and how the footage fits into a larger context.

On social media, short videos can be an effective way to galvanize an audience or direct viewers’ attention to a particular moment captured in a longer recording. However, often these videos are shared without details of where and when they were filmed, or what led up to that particular moment. Two examples demonstrate different ways we tracked down a longer recording based on a short online video.

In January, a 15-second video was shared on the Twitter by Por Un Sahara Libre. In Spanish, the tweet reads, “Plainclothes Moroccan police charge at a peaceful demonstration today in Laayoune,” followed by the hashtag, “ReferendumNow”–a message of solidarity calling for a referendum for self-governance in Western Sahara.

To find information that would help corroborate that this was indeed filmed on the date and location indicated, and to have a clearer sense of what happened before and after the moment shown here, we wanted to find a longer recording.

In this case, the logo for Sario TV gives us a starting place. We recognized the logo as belonging to the Sahrawi Center for Media and Communication–a group dedicated to documenting human rights abuses in Western Sahara. By searching the organization’s YouTube channel, we find the original version of the video, with the date and location of the recording in its video’s title, corroborating the basic information given in the Tweet.

This version includes a minute and a half more than the shorter clip. We see  demonstrators gathering on a corner and unraveling a banner before they are rushed by officials. In this longer clip, we also see a security vehicle pull up to the scene and, just before it ends, two officers run in the direction of the filmer, suggesting they were tipped off to the filmer’s location.

In the example below, a video by Sahrawi Center for Media and Communication is edited to ensure the viewer sees a particular moment when a plainclothes officer throws a cellphone on the ground.

While the edit helps to highlight a moment that may have been hard to follow in a much longer recording, it also raises a number of questions for a viewer. What led up to that moment? What happened afterwards? 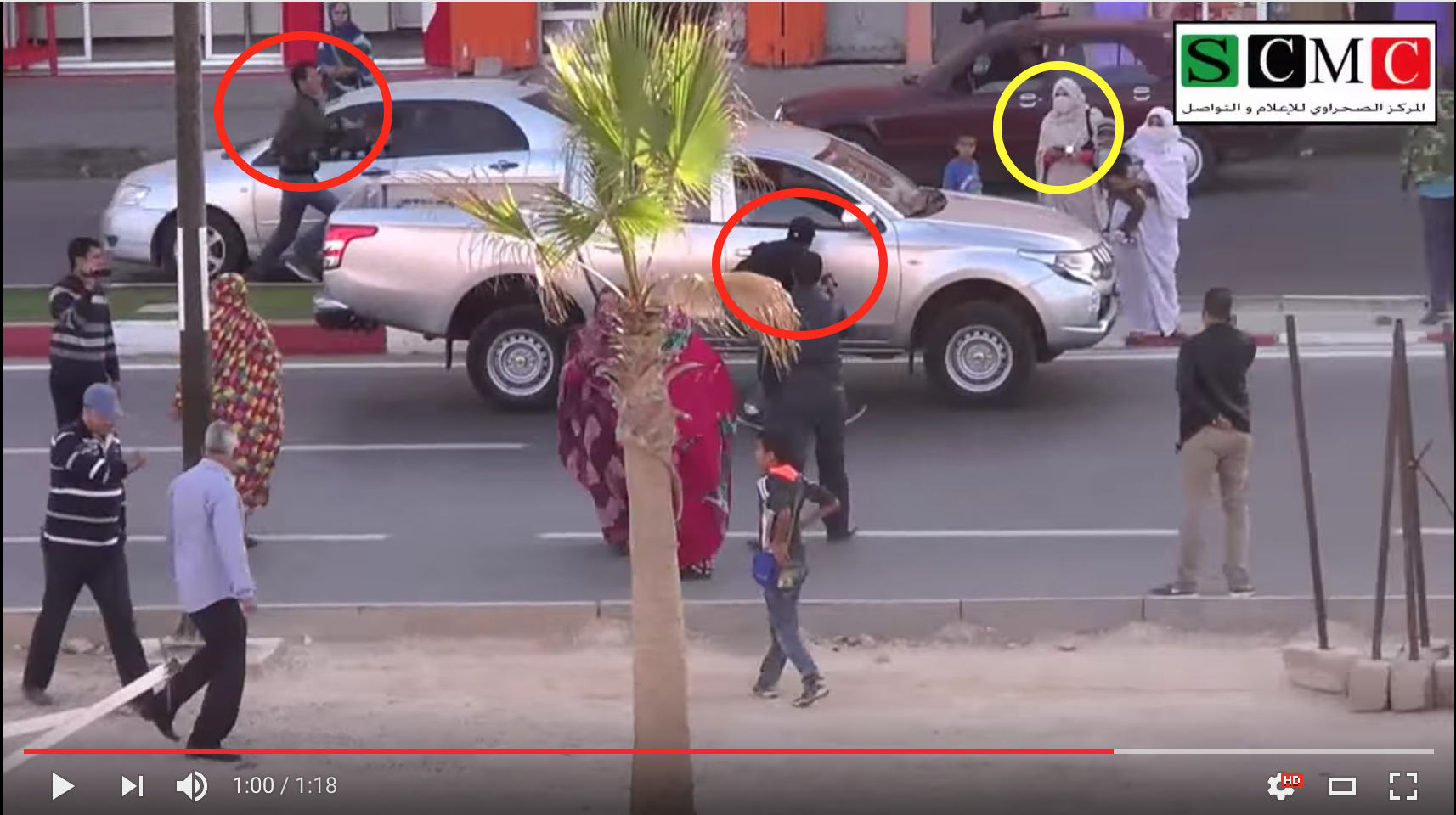 A screenshot shows two men preparing to seize and destroy the cellphone held by the woman. (Annotations by the WITNESS Media Lab.)

Going back to the uploader’s YouTube channel, we find a longer version of the same footage, uploaded the same day. Here, we see a small, peaceful demonstration. A car pulls up and three men using walkie talkies yank the protesters’ banner right out of their hands before driving off.

The three women and one man continue to protest, until they are approached again by plainclothes officers who attempt to disperse them by force. When the camera pulls back, it reveals women standing across traffic from the protest, and for a moment, we see the flash of a cellphone in the hands of one of the women, before she is rushed by an officer who smashes it to the ground. This longer recording provides documentation that fits into larger patterns of abuse filmed and reported in Western Sahara.

In the examples above, we had a starting point to begin our search for the original uploaded footage. Without that, finding context or a longer version of a recording can prove more difficult.

Early this year, a video was shared widely on Facebook showing the disturbing scene of uniformed officers brutally beating a civilian. The description stated that it exposed the Moroccan state violating the human rights of Sahrawis. Was it a recent recording? Where was it filmed? We wanted to learn more.

In this case, a reverse image search can help find older versions of the video–ones that may offer more information about what we’re seeing. If the video in question were on YouTube rather than Facebook, the YouTube data viewer would be the tool of choice. Facebook videos are trickier for this type of research.

We used VideoVault–a tool to assist journalists and human rights advocates preserve, view, and analyze online footage. By using the Chrome extension, we were provided a link that allowed us to view the footage as well as thumbnail images that each linked to a Google image search. A search on the first few images did not bring up any related videos, but on the third image, a Google image search yielded a video of the same footage posted in 2012 by Equipe Media. Further investigation would be needed to ascertain exactly where it took place, but from this initial research we know that the Facebook video in question is not a recent recording.

While online tools and research strategies can help international monitors, researchers and advocates understand online footage, another approach is to support the citizen journalists and human rights activists who record and share the footage in the first place. While the people and organizations who record human rights footage in Western Sahara face unique risks and constraints, training and resources can help them film more safely and effectively. Below are some of the tips and resources we’ve shared with Sahrawi filmers and others to help them reach their target audiences, and in turn to help viewers like us better understand their footage:

Understanding footage filmed and shared online by at-risk journalists and activists can be challenging for human rights monitors and journalists. New tools and practices for verifying and contextualizing online video as well as supporting filmers and activists to share footage effectively can help put a spotlight on otherwise unseen or under-reported abuses.

For more tools and resources on verifying online videos, see the WITNESS Media Lab’s compilation of resources and WITNESS’s Video as Evidence Field Guide. Share your own tips and resources with us by reaching us on Twitter.

Featured image is from a video of a protest intervened by security forces in March of 2016. The footage was shared online in both a short version which pointed out a security officer known for using excess force, and a longer version. Both can be seen on the Watching Western Sahara Checkdesk.