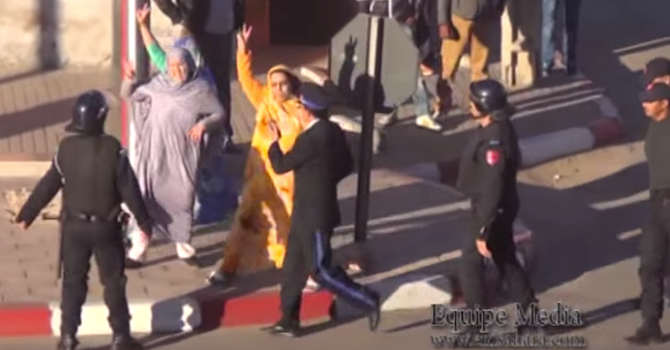 By Madeleine Bair and María Carrión

Watching Western Sahara is a collaborative video curation platform created to curate and contextualize eyewitness footage of human rights in the occupied territory of Western Sahara. WITNESS’s Madeleine Bair and FiSahara’s María Carrión explain how and why the collaboration came to be.

For three years, WITNESS has watched online videos from Western Sahara, a territory that lies between Morocco and Mauritania and that has been occupied by Morocco since 1975. On the YouTube channels of groups like Equipe Media and the Saharawi Center for Media and Communication, we would see scenes of police and other Moroccan security forces beating men and women with batons, arresting foreign activists, and blocking journalists and other observers from taking pictures of demonstrations.

For a foreigner watching on YouTube, the clips offer a peek into a society rarely covered by the media, due to the sorts of censorship and repression the videos expose. But curating videos to tell that story is like finding pieces of a puzzle without knowing what the full picture is.

What happened before and after the recording started? Were we adding the right context? Was one video related to the other, or were we connecting dots where there were none? And why did the videos often have loud soundtracks and big water marks?

The best people to answer those questions are the filmers themselves. But reaching out to them would be logistically and ethically challenging. In fact, the difficulty of communicating with citizen journalists is one of the gnawing challenges for human rights investigators, journalists, and advocates viewing abuse documented in online footage. In some cases, the filmers are the perpetrators themselves. In others, they are whistleblowers, releasing footage online anonymously to expose injustice. (We’ve seen this, for example, with prison abuse videos taken by guards in Egypt and Malaysia, or with videos showing labor abuse in Saudi Arabia and Angola.) Others still are living in conflict zones, and trying to reach them could not only strain their limited resources, but also put them in danger.

This is what makes curating eyewitness videos of human rights particularly challenging. We know that someone is taking the effort and often the great risk to expose abuse, but our ability to use their footage effectively can be terribly strained.

Such was the case in Western Sahara. Between the risk of endangering activists and the challenge of piecing together a puzzle from incomplete documentation, many international monitors and human rights advocates have hesitated to use online footage from Sahrawi media activists in their monitoring and documentation.

This is especially grave considering that most international human rights monitors and media have no access to Western Sahara: both Amnesty International and Human Rights Watch have been banned from entering the territory and the UN peacekeeping mission there, recently decimated by Morocco’s decision to expel most of its civilian component, has no human rights mandate. Sahrawi activists report that this media blackout enables Morocco to act with impunity, subjecting the indigenous population to a range of civil, political, cultural, social and economic violations at no political cost. In that context, Sahrawi media activists documenting human rights violations are not just first responders: often they are the only responders. Yet their footage rarely reaches the outside world.

But what if there were another option? What would happen if the viewers monitoring human rights abuse online could collaborate with the filmers on the ground?

A a human rights film festival taking place in the Sahrawi refugee camps in southwestern Algeria, FiSahara also posed these questions. As we trained young refugees in filmmaking skills in workshops and in the local film school, we began to see an urgent need to also train self-taught Sahrawi human rights activists in the Morocco-occupied Western Sahara who were filming their everyday reality under occupation.

These activists needed to improve their skills so that the videos they filmed at great risk reached the standards needed by their key audiences: international human rights monitors, the media and the activist community. We partnered with WITNESS to offer four video advocacy trainings for Sahrawi filmers under occupation and in exile. They learned to identify key audiences and their needs, and to craft messages for them. They learned how to film, edit and share human rights footage safely, ethically and effectively. They also learned how video can be used as legal evidence in courtrooms or international legal cases.

While Sahrawis increasingly became more proficient at filming and sharing eyewitness videos, they were still having trouble reaching their international audiences. The quality of their videos had improved, but the context that would help outsiders understand and verify them was often still lacking. Recognizing the need to go beyond training to bridge the gap between creators and audiences, WITNESS Media Lab joined with FiSahara and the California-based Meedan to create Watching Western Sahara, an online collaborative platform for video curation.

Using the Checkdesk platform, an international network of volunteer curators shares footage and adds context such as translation, description, related videos, photos or reports, geolocation, and other information that gives videos the veracity and context sought by key audiences. Users of the platform can conduct comprehensive searches for footage using thematic tags. Several human rights organizations are already using our video database to prepare their human rights reports on Western Sahara, and we are collaborating with them to facilitate their work.

For the WITNESS Media Lab, the chance to work with the people behind the footage we had viewed online is helping us understand that footage and add the context needed to use it as a tool for human rights documentation and advocacy. For Sahrawi media activists, hearing feedback from people viewing their footage on YouTube halfway around the world helps them capture and upload the footage in a way that better suits the needs of their target audiences.

Together, we have curated nearly six months of online footage and are developing a way for Sahrawi filmers to more effectively record and share their videos so that advocates, journalists and investigators watching it around the world are able to use it to better monitor human rights in Western Sahara.

For this project we have combined our collective experiences—WITNESS’ long trajectory in using video as an effective human rights tool, local Sahrawi activists’ work in documenting human rights abuses in the field, Meedan’s skills in building digital tools to facilitate collaborative journalism and FiSahara’s role as a catalyst between Western Sahara activists and international changemakers. In the coming weeks, we will share more of what we’ve learned from this collaboration, as well as publish a report of what we have seen in six months of curated footage.

Madeleine Bair is the WITNESS Media Lab Program Manager, and María Carrión is the Executive Director of FiSahara.