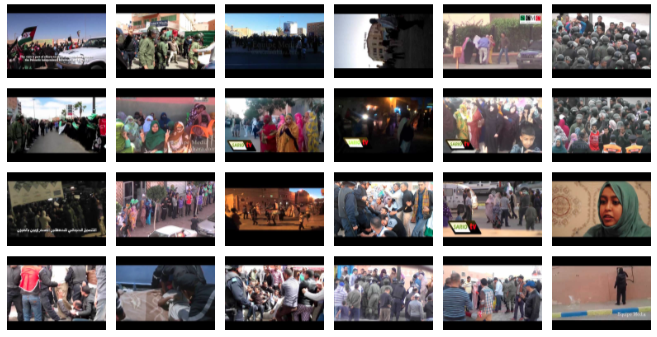 Freedom of expression, self-determination, access to education and employment, control of natural resources. These are among the many concerns of the people of Western Sahara, as seen from protests, testimony, and abuses captured in six months of eyewitness videos filmed by Sahrawis and shared online.

This year marks the 41st year of Morocco’s occupation of Western Sahara, and 25 years since the UN brokered an agreement to hold a referendum on self-determination—a referendum that has yet to happen. In the meantime, the people of Western Sahara struggle to be heard. Due to strict limitations on local press and an effective prohibition of international media and human rights monitors, their stories, grievances, and calls for action go largely unseen and unheard by international community.

Many Sahrawi independent journalists and human rights defenders seek to change that by taking great risks to film activism and abuse in the occupied territory and share their footage online. For six months, the WITNESS Media Lab, in collaboration with FiSahara, has monitored their videos. We have identified consistent sources, trained Sahrawi journalists and human rights defenders, and curated online videos so they can be a source for the international community to witness the experiences and concerns of Sahrawi people.

Those videos can now be seen on Watching Western Sahara Silk, an interactive platform showcasing dozens of curated and contextualized videos. Each one is presented as a datacard containing a description as well as metadata such as the date and location of the recording, and tags related to what it documents, such as “protest,” “injury,” “hunger strike,” or “self-determination.”

While we could not curate all videos shared by Sahrawi filmers during this time, and not all human rights issues or abuses are caught on camera, these 91 videos collectively reveal an active civil society and patterns of human rights abuses in a way that can fill gaps in traditional means of documentation and advocacy.

Here we present some of the key issues captured in the curated videos.

A Range of Social Grievances

The right to self-determination is one that Sahrawis have fought for since 1975 and continue to call for today. Among the 23 videos tagged with “self-determination” are ones showing activists hold flags for Sahrawi independence and call for a referendum.

While the right to self-determination is related to so many other human rights and civil liberties affecting Sahrawis in the occupied territory, protests address a wide range of grievances. Videos capture demonstrations calling for jobs, access to education, investigations into disappeared activists, the release of political prisoners, and an end to mineral extraction and trade deals that profit off Sahrawi resources while benefiting the occupying state.

Moroccan authorities, who describe Western Sahara as Morocco’s “southern provinces,” have dismissed Sahrawi activists as “opportunists” who represent a “small minority,” but this footage indicates that social and political discontent among Sahrawis is popular and widespread. Videos show demonstrations of dozens—sometimes hundreds—of protesters engaged in nonviolent resistance, while a digital mapping of protest videos reveals a movement that extends from the main city of Laayoune to the occupied cities of Dakhla and Boujdour, as well as the southern region of Morocco, where cities like Tantan are home to large Sahrawi communities.

Chart of the number of videos by category

The majority of eyewitness footage documents peaceful demonstrations, often intervened by authorities. In fact, more than half of the videos we curated document some form of intervention by plainclothes or uniformed security forces. Some protests are intervened at the start, before they can grow beyond a handful of people. For larger demonstrations, dozens of officers amass to break them up, often using aggressive force. (See this example filmed in Laayoune on March 5.) Ambulances are often parked at the scene, ready to remove injured activists. Thirteen videos tagged with “injury” show protesters left on the ground with wounds, or being carried away on stretchers.

A large social movement addresses discrimination in access to jobs and higher education for Sahrawis. Protests have been organized in cities throughout the occupied territory and southern Morocco, and in several economic sectors, including fisheries and phosphates. In their demonstrations and open letters, activists claim that discriminatory practices favor Moroccan settlers over native Sahrawi people.

Closely related to the issue of jobs for Sahrawis is the concern that Moroccan and foreign companies are profiting off Sahrawi land and waters without benefiting or seeking the consent of local communities–an argument that international legal opinions have sided with. Videos from January show activists taking their concerns to the Casablanca headquarters of the state phosphate company.

In the past six months, Sahrawi prisoners have launched hunger strikes to protest their detention, treatment, or conditions. These include those arrested for their alleged involvement in the 2010 Gdeim Izik protest camp, and the Sahrawi employment activist Brahim Saika, who died in a Moroccan hospital in April after he began a hunger strike while in detention. Videos show large protests in solidarity with hunger strikers, and demonstrations calling for justice for political detainees. Concerns about the treatment of Sahrawi detainees have been corroborated in findings of international monitors, including the UN Special Rapporteur on torture and other cruel, inhuman or degrading treatment or punishment.

From self-determination and control of natural resources, to infringements on the right to record and testimonies of abuse, there are a number of other issues documented in the eyewitness videos curated in the past six months. On Watching Western Sahara Silk, you can view and research all of the videos, read more about the events they document, and use the Explore tool to create your own data visualizations.

For instance, a visualization of the most frequent tags shows a significant number of datacards with the tag “women,” reflecting the prominent role women have in Sahrawi political resistance and civil society movements. Sahrawi women appear to play a central role especially in demonstrations protesting the disappearance, torture or imprisonment of Sahrawis.

Chart of the number of videos by tag

Many of the curated videos document specific events that affected Western Sahara in the past six months, including a hunger strike by Sahrawi employment activists, a day of protests on March 19th and the crackdown by authorities, and the death of leading Sahrawi activist Brahim Saika while in detention. Those events are featured on the Stories page, with further context as well as collections of relevant videos.