Community-Based Approaches to Archives From the Black Lives Matter Movement

In recent years, the interest in community-based participatory archiving has grown enormously. This growth reflects a recognition that people and communities should be empowered to document and preserve their own histories, and to make decisions about how their stories are collected and used. These participatory archive movements are especially valuable in communities that institutional archives have traditionally overlooked or misrepresented, and in communities where archives belonging to the state or other institutions have historically enabled discrimination and abuse.

Most records documenting #WattsRiots are held by news agencies & police. Why it's so important how we document #Ferguson, #SayHerName, etc

“It is essential to seize the power of archives and use it to hold institutional and government leaders accountable. All aspects of society should be documented, not simply those where power has traditionally resided.”

-Randall Jimerson,“Archives for All: Professional Responsibility and Social Justice”

When communities create, select, and preserve their own records, it becomes possible to form a more complete and accurate history of their members’ lives and experiences. Moreover, records from the community can be used to counter blind spots, biases, and outright lies in official accounts, as we saw in the case of Feidin Santana’s video of the killing of Walter Scott. That video and many other recordings of police encounters are throwing a spotlight on the everyday experiences of black and brown communities that have long been ignored and marginalized by the dominant society. Collecting these stories and making them available are acts of defiance, and can support a community’s fight for justice.

A number of community-centered archive initiatives are emerging from the multifaceted Black Lives Matter movement. The projects below share a collaborative approach between traditional archives and archivists, community organizers, and concerned individuals. (It’s worth noting as well that they all employ the open-source Omeka platform for inviting community submissions and providing online access to collections.) This is not an exhaustive list, and we’d be interested to learn about other projects!

Documenting Ferguson is a collaboration between Washington University and other St. Louis-area universities and organizations. The project seeks to preserve and make accessible media captured and created following the killing of Michael Brown. Its ultimate goal is to provide diverse perspectives of the events surrounding the conflicts in Ferguson. Check out this interview with librarian Meredith Evans about the project.

Preserve the Baltimore Uprising is a collaboration between Maryland Historical Society, Baltimore-area university faculty members, museums, and community organizations. Similar to Documenting Ferguson, its purpose is to preserve and make accessible diverse perspectives from people directly impacted by the death of Freddie Gray and the protests and events that followed.

As part of the kick-off of the People’s Archive in mid-August, Cleveland community organizers worked with archivists in town for the Society of American Archivists annual meeting for the  Righting the Record Oral History Project. Over two days, the project recorded 45 first-hand accounts of police violence in the city. 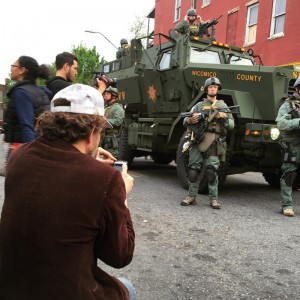 While the collections for these projects ultimately reside within institutional repositories, the approach to collecting and access is a departure from the traditional archives paradigm. As the human rights archivist Michelle Caswell argues, community archiving principles of participation, shared stewardship, multiplicity of formats and perspectives, archival activism, and critical self-reflection can be applied to archives work regardless of where records are physically located.1

In recent years WITNESS has shifted its archiving focus, from being primarily a repository for human rights video to supporting human rights activists to create their own archives through training and resources like the Activists’ Guide to Archiving Video. We hope to empower activists with the knowledge and skills needed to manage and preserve their own videos, for continued use in activism, and to ensure the preservation of stories and events that too often are marginalized or ignored.

Whether records of human rights abuse reside in institutions or remain in the custody of their creators, for those of us entrusted with these records, I would echo Caswell’s assertion that “archives documenting human rights abuse are first and foremost responsible to survivors and victims’ families and not to state actors, politicians, journalists, and academic researchers.”2 While this may seem an obvious point, I fear it sometimes gets lost among those collecting and using records on a large scale, or for high-level purposes.

Through approaches like the ones listed above, I hope we will see the further growth of archives grounded in and responsible to the communities of which they are part.

Yvonne Ng (@ng_yvonne) is the Senior Archivist at WITNESS. Any community archives focused on police brutality we missed? Share your thoughts and questions with us @WITNESS_Lab.